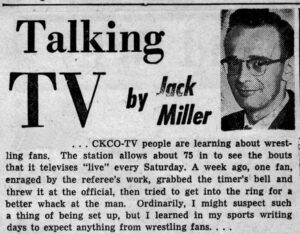 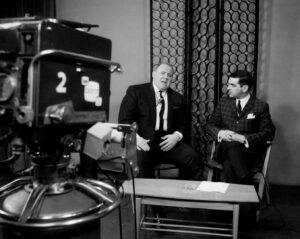 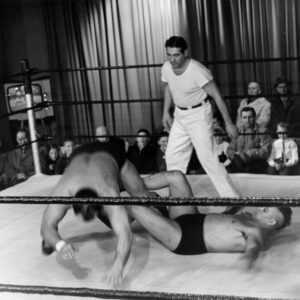 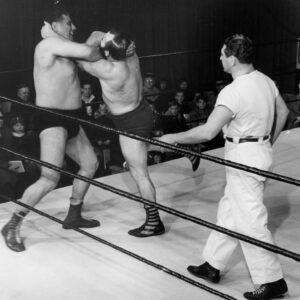 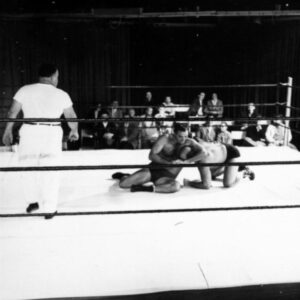 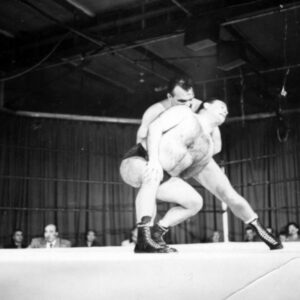 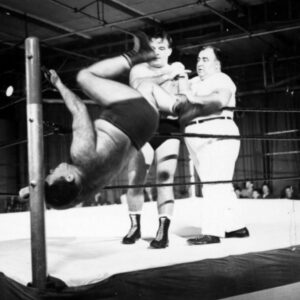 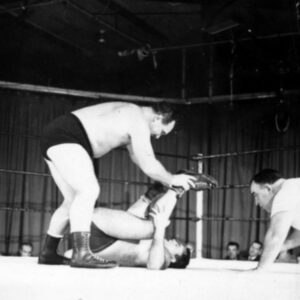 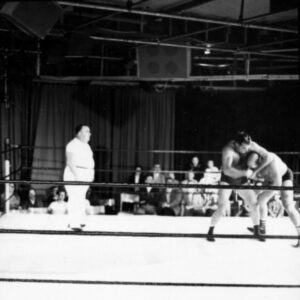 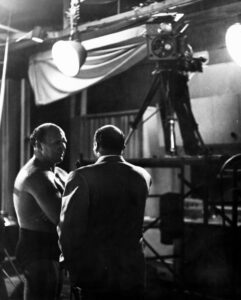 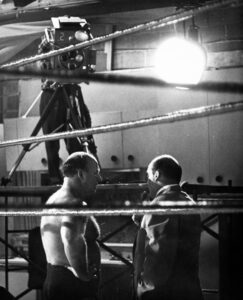 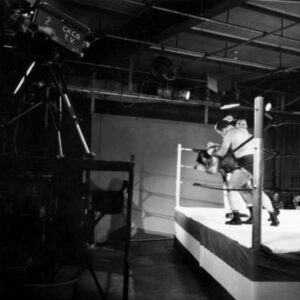 Flash from the Past: Live from Kitchener, it’s TV wrestling
By Special to Waterloo Region Record – rychmills@golden.net
Fri., Dec. 10, 2021

Today’s Flash from the Past, in addition to having my name on it, should also say: “Inspired by Marshall Ward.” The Waterloo Chronicle columnist recently wrote an essay that helped me shed my own discomfiture at having “Rabid Wrestling Fan” in my CV. Marshall’s touching remembrance of Angelo Mosca followed the football/wrestling icon’s death in early November. A generation before Marshall got his rasslin’ fever, my own early teenage self was ringside in Kitchener for the likes of Bobo Brazil, Bulldog Brower, Sweet Daddy Siki, Little Beaver, Don Leo Jonathan and Whipper Billy Watson.

In the late 1950s/early 1960s, Kitchener’s CKCO-TV was less than a decade old and strongly local. There were hours of airtime to fill; viewers needed to be attracted; wrestling was popular; there was a large TV studio … add in one more factor: one of the most-watched TV shows on this side of the border was Chuck Healey’s live wrestling on Buffalo’s WBEN. Put it all together and shazam! Live wrestling at CKCO!

Two teenage Waterloo boys (Ron V and me) were soon ringside — literally. The few seats were jammed against the ring, so the words, sweat, grunts and blood of real sports heroes were just a couple of feet away. What more could a pair of 15-year-olds want in 1961?

A decade later, I was working in that same building: the grunt-and-groaners were long gone, but several people who were part of CKCO’s wrestling days became friends and have contributed some wrestling recollections.

Larry McIntyre was a newsman and program host back then: today, he remembers Studio B, before the days of videotape, hosting live wrestling on early Saturday afternoons. A couple of hours later, that same Studio B was welcoming dancing teens to Canadian Bandstand. Larry Ernewein, just a youngster then, was hired for $5 each Saturday with three buddies to tear down the ring and frantically get the bandstand sets in place. That eventually led to a career at CKCO in the arts and sets department.

Wrestlers such as Yukon Eric and Haystack Muldoon remain vivid memories but standing out for McIntyre is Lord Athol Layton, who promoted the wrestling, did some announcing and the odd time would toss off his jacket and tie to “correct” one of the villains. “Layton was at least 6’5” and filled a door frame.” He was an English-born, Australian Second World War veteran who wrestled his way to Toronto, becoming a fan favourite, well-loved for his charity work. Layton lent a degree of legitimacy to what was even then a shady sport.

Gary McLaren, Mr. CKCO News for several decades, loves telling stories of Fritz von Erich. Fritz founded the von Erich wrestling clan but was born Jack Adkisson in Texas, a long way from the Germany that his wrestling persona adopted. Two famous Fritz moves were the “Prussian Drop” and “The Iron Claw.” Another McLaren favourite was Yukon Eric, known for three things: a 66-inch chest; his missing ear (accidentally torn off in a match with Killer Kowalski); and his fabulous cars. He once parked in front of CKCO at a bus stop when a trolley came along and honked. Eric unfolded his 6-foot-one-inch, 275 pounds from the car and strode to the trolley to have a brief one-way discussion with the driver. The trolley backed up a bit and went around!

A regular “little old lady” was ringside for each match hurling juicy insults, Styrofoam cups and even the timer’s clock at villains. Uncorroborated evidence points to her being a member of the wrestlers’ entourage, paid to add excitement.

Would it destroy memories to reveal that before and after the ring action, in an empty apartment above the TV offices, the wrestlers all showered, changed and sat around over a bottle to plan or relive the matches?
Flash from the Past thanks Bob Tiffin, quarterback of the CKCO history website, for contributing the crisp black and white photos.

In January, Flash from the Past looks at wrestling in Kitchener-Waterloo almost a century ago, including indoor wrestling in Victoria Park. I’ll let you figure out where you’d put a ring, 800 rabid fans and a half dozen, often-out-of-control grapplers. 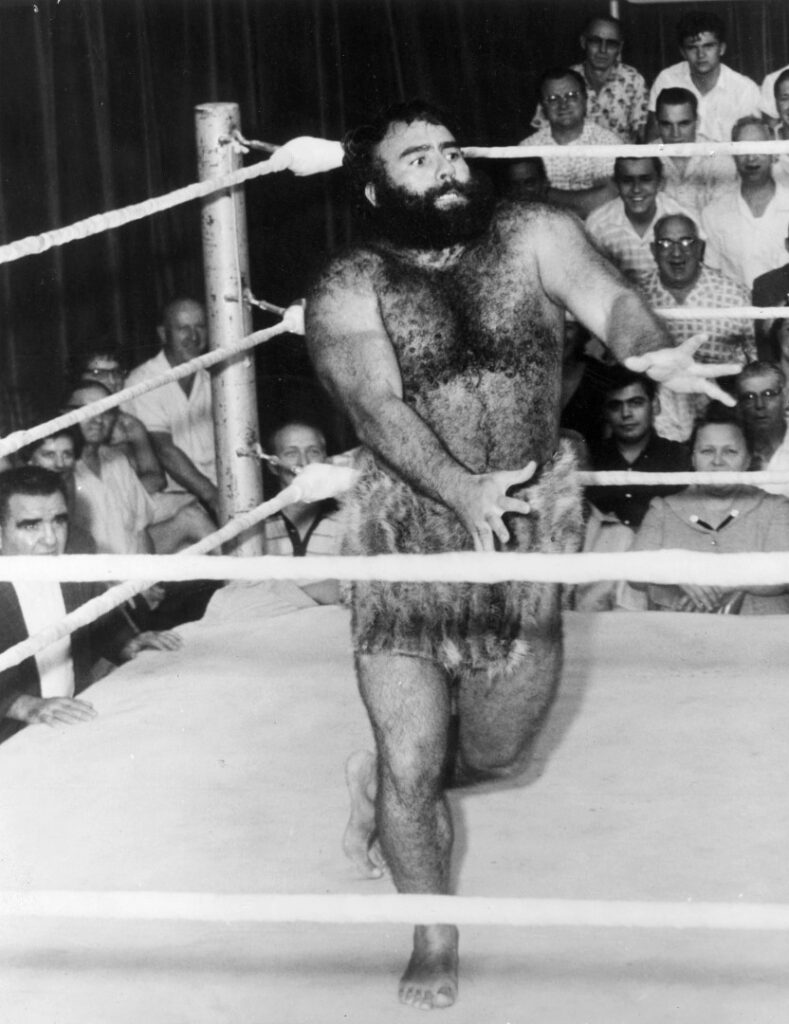 A friend recalls seeing “The (Sicilian) Beast” in a match at the old Hamilton baseball stadium with his father. As the hairy villain entered, his dad shouted out “That’s John Yachetti, who lived just down the street from us. He’s probably never been to Sicily!” The Beast at least had Italian blood!