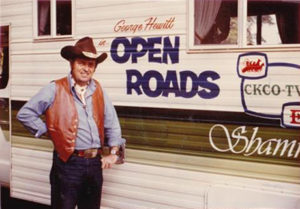 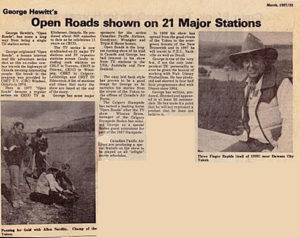 When and how did you get started in Television?  That is one of the most asked questions of my life. Well, the question  is not when did I start, but when will it end? …..  Memories, what are they? The good times?  The fun times?  The happy times?    Maybe………

The times that I remember most are the hard times. Out, broke and alone…. This is when you discover the difference between a winner and a loser. The difference is a loser will think of excuses of why they can’t do something without or before they even try. A loser never wins. On the other hand I believe that you do not have to win the race to be a winner. If you give your all, if you try your best, if you do the right thing you can never be a loser.

I followed that path throughout my 85 years…. never give up. With my injuries most sports will not welcome you aboard. ….Well, maybe one sport is an exception, that was Rodeo. “Get on the horse cowboy and welcome aboard.” That was the engine that excited me. CBC Windsor, hearing of my of my success in Rodeo, became interested in me and my life style. Over the next couple of years we had a number of conversations with CBC  who offered several  ideas that they felt would make good Canadian programming. We finally agreed on a format, “just me living my every day boring life of a cowboy.” OPEN ROADS would be the title.

A real cowboy on TV.  After 7 programs aired, with much higher ratings than anyone expected, the Program Manager called me for a meeting. Because of the good ratings against the prime time programs from the states, he felt we would do even better if I would appear in a sports coat white shirt and tie. Well guess how that ended. I refused and walked away. I thought – you will never work in TV again dummy.  They even offered me a raise to stay, but…..

Out of work for a couple of years…CKCO TV in Kitchener was interested in me. I met with the head of programming, Don Willcox. I was up front with Don, I told him I was blacklisted and advised him that what you see is what you get. I’m Just a worn out old cowboy. Nothing more nothing less. That was the beginning of some of the best times of my life.  I never signed a contract and Don also gave me full control over the program as producer/director and coffee boy etc. I was pleased to work with most of the camera men at the station, John Arjas, Bucky (Brian Dunseith), Dan Bailey, and Peter Graham from film developing, to name a few. The directors were great once they relaxed and had fun. Because of CKCO-TV I was able to help a lot of needy people, that is a win/ win kind of deal…

Paul Francescutti was the kind of guy I liked. He had an imagination. One night when he was directing he came up with the idea of driving his motorcycle on the set to open the show. He was great. AKA the Evil Knievel  of CKCO-TV.  Paul, I guess, forgot how slippery the floor was and when he roared in and put on the brakes he slid into me sitting on a barrel full speed… Now I admit that I have been bucked off my share of Rodeo Bulls and Bucking Horses, but that was the first and only time I was bucked off a barrel. George Copeland was another of my fun guys with super talent as a director.

I had about ten years at CKCO-TV associating with some of the best people in Television.  The editing of the program was always an adventure. Miles of film or video tape to go over, and little time to do it with me learning the game… I will always be grateful to the editors and my friends at CKCO-TV and especially Don Willcox who was one of my biggest supporters and gave me a chance. With all of their help I felt I had it made. Even I could get it done working with all of this talent. My successes with over 30 commercials and the 4 shows I shot with “WALT DISNEY Television Productions are directly linked to CKCO-TV.

I wish I could remember everyone’s name, but at my age 85, the mind is the second thing to go and I can’t remember  the first thing that went……..Hmmmmm?

Thanks for the Memories…..George Hewitt – Open Roads 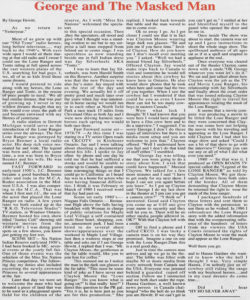