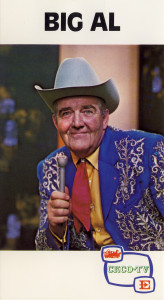 Larry: “Who do you know who’s everybody’s pal?”

As on-air sidekick and producer of Big Al’s Ranch Party the three years bridging the 60s into the 70s, that was my question to the assembled five to ten year olds in the studio audience, and their full- throated response was the daily launch to what was then the most widely watched after-school show in Southern Ontario, extending its reach into northern New York, and lower Michigan.

Al was actually in dry runs at CHCH with an upcoming air-date in 1959 when the powers-that-be made the decision to go instead with Cap’n Andy. So Al came to Kitchener. CKCO was already on the air with Wally Walrus, – Sports Director Tom Rafferty in papier mache Walrus head and flippers, with sidekick Bob Bestell – so Al joined the Sales staff. When Tom died, Al was seconded to the time-slot, and Big Al`s Ranch Party began its 50s-60s-and 70s run. 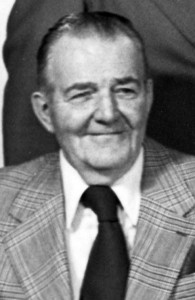 Ranch Party was a live half-hour, 4:30 to 5:00 Monday to Friday, with a studio audience surrounding Al on camera. The audience were regulars who made an after-four beeline to the studio from neighbouring King Edward and Sacred Heart schools in Kitchener, along with visitors from through-out the bigger CKCO viewing area celebrating birthdays and other special occasions – Westons supplied an iced birthday cake daily, for the featured cake draw.

The show was a mix of interaction with Al recognizing those with birthdays, (more than once leaving a warm, wet mark on Al`s lap), audience participation games, cartoons, drop-in guests – volunteers from the K-W Humane Society with prospective pets were regulars – and talented youngsters booking in from Collingwood to Niagara to Windsor, singing, dancing, and reciting under direction of their teachers, or under their own initiative. Among the regular and semi-regulars were multi-talented Dierdra King of Kitchener; the Warrington family – Mom, Dad, and kids – from Collingwood, who made a day of it entertaining at KW Hospital as well as appearing with Big Al; an eleven year old with a spot-on imitation of Phyllis Diller enjoyed a regional mini-career as a result of her appearances on ‘Big Al’; and magician Bobby Breadner, from Waterloo, who successfully springboarded pre-teen appearances on `Big Al` into a lucrative national career in his later teens and twenties, before opting to run the family business in lieu of a life in entertainment. The talent segments of the show were eventually spun off into the Sunday noon-hour Big Al’s Talent Showcase, and an annual Christmas Showtime special. 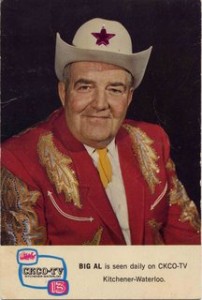 Out of the studio, Al was CKCO’s man about Western Ontario, on call for appearances in parades, at fairs, and other promotional events, which included handing out Hallow’een candy to trick-or-treaters who showed up at CKCO studios. His two sequined costumes, one red, one blue, were tailored by the famous Nudies of Hollywood. The red convertible came from Harvey Krotz Ford in Listowel, which then supplied all of CKCO’s vehicles. The trademark Texas Longhorn steer horns on the hood were assembled by a leather-working friend of mine in Chicago.

Al’s career in entertainment began in the Hungry 30s as a depression-era drummer working gigs across Canada, evolving eventually into time sales with emerging Northern Ontario radio stations, with MC roles and talent promotion on the side. Betty Thompson once recalled to me that her initial public appearance was as an 8-year old with Big Al at the Aragon in Peterborough. Throughout his years in Kitchener, Al, through connections with Toronto agencies, regularly supplied talent for any number of area organizations looking for entertainers.

Away from CKCO, Al was regularly spotted at HiWay Market in Kitchener, while he, wife, Gerry, and daughter, Kathy, did the family shopping. Gerry was a vivacious French Canadian red-head from Fort Colounge on the Ottawa River. Al’s father, a widower, retired CNR conductor, lived with them in their south Kitchener home. Pat Ludwig, coincidentally, was their next door neighbour.

Al left CKCO for retirement in the late-70s, his health becoming problematic and eventually requiring bouts of hospitalization. At his funeral, in his eulogy, Rev. Grant McDonald of St Andrew’s Presbyterian Church, stated Al’s death was truly the end of an era, his passing the closing of a chapter in the lives of the generation for whom Al was ‘everybody’s pal’, who now with families of their own, fondly regarded him as an key figure in their growing up, and, more widely, of life in Southern Ontario and television in 50s, 60s, and 70s. True. Three and four decades after those years, I frequently meet individuals who recall proudly how they were once ‘on Big Al’.

Thanks to Larry McIntyre for these memories of Al and the show.  If you have any memories you wish to share please forward them to the address below. 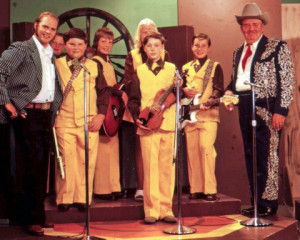 The Favorite Five With Big Al Thomas Wade of the Favourite Five band played The Big Al Show over 30 times. 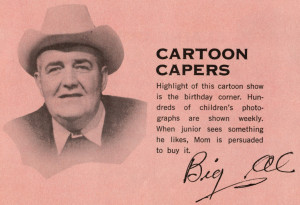 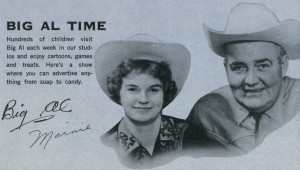