Wayne was born in Winnipeg and attended Dakota Collegiate in St. Vital. He always loved music and announcing, and was instrumental in starting the noon hour broadcasts in high school. His life time career as a radio announcer, then television sportscaster began when he was 17 years of age. He worked at stations in Dawson Creek, B.C; Kenora, Ontario; Sarnia, Ontario, then many years at CKCO in Kitchener/Waterloo, Ontario. Wayne also enjoyed the work he did on behalf of the Special Olympics.

Wayne is survived by his “special lady” Marg Paulissen of Guelph; son, Jeffrey of Ottawa, two granddaughters, Kiarra and Sydney; and his sister Lynda Taylor (Ed) of Winnipeg. He was pre-deceased by his parents Fred (1985) and Joey (1997) Kooyman. 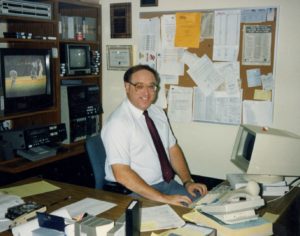 Due to ill health, Wayne took an early retirement from his broadcasting career in 1998, and for several years was a resident at the St. Joseph’s Health Care Centre in Guelph.

At Wayne’s request cremation has taken place, and a funeral service will not be held. Rest peacefully Wayne in “your place in the shade”.

A tree will be planted in memory of Wayne Kooyman in the Wall-Custance Memorial Forest, University of Guelph Arboretum. Dedication service, Sunday, September 15, 2019 at 2:30 pm.