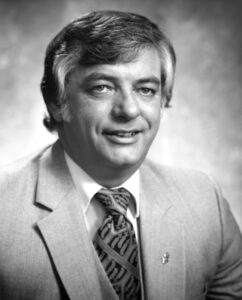 Walter Hulme, champion of small market radio, passed away Tuesday, April 29, 2008, in Guelph, Ontario, after an extended illness. He was 68.

Walter was a graduate of Radio & Television Arts from Ryerson 1961 and went on to have a long 40+ year career as a champion of small market radio. First at CKOX in Woodstock then to CAP Communications in Kitchener and then to North Bay to be part of the launch of CHUR-AM.

After a brief stop in Kapuskasing at CKAP, Walter along with his wife Betty Jean, settled in Elliot Lake and assumed the management duties at CKNR/CJNR/CKNS AM first with MidCanada Communications and then with Pelmorex Radio.

In 1996, in conjunction with committed family and local investors, Walter formed North Channel Broadcasters Inc. and purchased the assets of the three struggling AM stations replacing them with one powerful FM station that played an important role in uniting a large and diverse geographical area stretching from Espanola in the east to Blind River in the west and including all of Manitoulin Island. (an area now known as Algoma-Manitoulin). In 2004, Walter sold the assets of North Channel Broadcasters to the Haliburton Broadcasting Group and retired to Southern Ontario.

One of the things that Walter was most proud of during his long career was to be part of the founding of the Ontario Independent Radio Group, an ad-hoc advocacy group for small market, independent radio operators. Walter was also deeply committed to the work of Rotary International, as well as serving with local Chambers of Commerce, the Ontario Chamber of Commerce, and serving as the chair of the hospital board in Elliot Lake.

Walter Hulme touched many lives in the broadcasting industry, and in the communities where he worked and lived. He will be sadly missed by many.

Walter had a long career in Broadcasting throughout Ontario for over 45 years and was an avid and devoted member of Rotary. The family will receive friends at the Gilbert MacIntyre and Son Funeral Home, Hart Chapel, 1099 Gordon St., Guelph, on Friday from 2-4 and 7-9 pm. A Funeral Service will be held in the Funeral Home Chapel on Saturday, May 3, 2008, at 1 pm. Cremation to follow. As expressions of sympathy, donations to Rotary International, Sickkids Foundation or the Canadian Cystic Fibrosis Foundation would be appreciated by the family. Cards are available at the funeral home 519-821-5077 or send condolences at www.gilbertmacintyreandson.com.