William Clarence Crouter – It is with great sadness that the family of Wally Crouter announce his sudden passing on Monday, March 28, 2016. The eldest of five children, Wally was born to Clarence and Violet Crouter in Peterborough, Ontario, on January 20, 1923. His youngest sister Viola predeceased him, as did Kay, his wife and mother of their 3 children. He leaves behind his two sons Dale (Sheridan) and Glenn and his daughter Janice.  He will be missed by his four grandchildren Alicia (Greg), Jordan (Amy), Ellise and Cole, as well as his four great-grandsons Archer, Thomas, William and Jake. Also surviving him are his sister Muriel, his two brothers Gerry (Dorothy) and Rick and his devoted wife of 33 years, Lynne. Wally was a proud father, grandfather, great-grandfather and a loving husband. Wally enlisted in the Canadian Army at the age of 16 and like many underage soldiers toured Canada to promote war bonds before being sent overseas. In 1946, he was hired by CFRB as the “morning man” and for 50 years, his listeners enjoyed his easy manner of delivering information, music and stories about the people he met.  Known as the Crout, his popularity on and off the air with people from all walks of life near and far made for an interesting morning show. Wally was an active member in many charities. He loved music and sports of all types, but had a passion for golf which he played well into his 80’s. His early retirement years were happy and busy filled with travel, lots of golf and winters in Ft. Lauderdale. The last few years proved challenging, as an old war injury and advancing age gradually limited his mobility and life’s pleasures. Despite this, he retained his friendly manner and sense of humour. Over the years, Wally received many honours recognizing his achievements and public service. He was inducted into the Canadian Association of Broadcasters Hall of Fame in 1996 and the Ontario Golf Hall of Fame in 2012. Wally will be sorely missed, but he leaves family and friends with wonderful stories to tell of a life shared so generously. As per his wishes, funeral services will be private.  He would be honoured if you raised a glass to his memory, remembered those in need and donated to a charity of your choice.  Funeral arrangements entrusted to Thompson Funeral Home, 530 Industrial Parkway South, Aurora, Ontario L4G 6J4.  Online condolences may be made at
www.thompsonfh-aurora.com 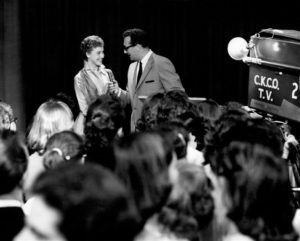 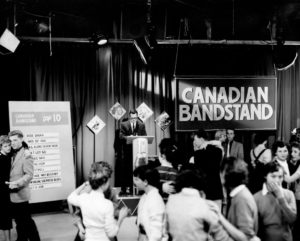 In 1954, Wally Crouter was the first host of Canadian Bandstand. The show aired live weekly from the studios of CKCO-TV, Kitchener, Ontario