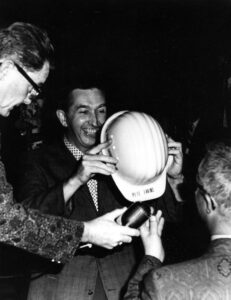 Died at the Kitchener-Waterloo Hospital, Sunday, January 18, 1976, James Edwin Eakins, aged 53, of 373 Redwood Place, Waterloo. He was born in Toronto and was a member of First United Church and the Rotary Club of Waterloo.

Resting at the Edward R. Good Funeral Home, Waterloo, Ont., after noon on Monday till noon on Tuesday then to First United Church for funeral service and committal at 3 p.m. Cremation to follow.

Donations to the Ontario Heart Foundation may be made as expressions of sympathy.