Percy Runnells was born in Elora, Ontario in April 1920. By the time he was attending high school (in the building that is now the Elora Centre for the Arts) he was taking art lessons by correspondence.

Runnells served in the Second World War. While stationed in Jamaica he enjoyed painting the local scenery, but during his tour of duty in France he was wounded by shrapnel. At the hospital in Toronto where he convalesced, art was considered therapy, and a room with painting supplies was made available to the veterans.

After the war Runnells enrolled at the Ontario College of Art, 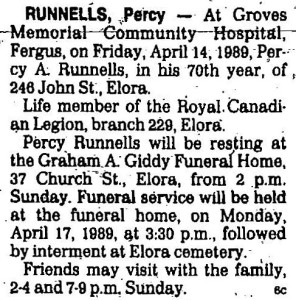 graduating in 1950. Back in Elora he converted the woodshed in his grandmother’s back yard into a studio and began painting the local people, houses, and churches. His station wagon, which served as a mobile studio, was a familiar sight along the country roads where Runnells often stopped to paint farms and the rolling landscape.

Throughout his life, his work was related to his passion for art, whether mounting displays at Beatty Bros. in Fergus, doing design and layout for CKCO-TV in Kitchener, or teaching at the Doon School of Fine Art, the Wellington County Board of Education, and St. Margaret’s School for Girls in Elora. Runnells also designed two of the stained glass windows at Elora’s lovely St. John the Evangelist Anglican Church.

Runnells died in April 1989, a village character and favourite, loved by his many students, painter colleagues, and lifelong neighbours alike.

In April 14, 1989, Percy Runnells, the artist who recorded Elora and the surrounding area for half a century, died. He was a familiar figure, painting village churches and houses from the back of his studio-station wagon, his stiff leg propped up and a shy greeting for the many people he knew. He is remembered not only for his art, but for his kindness to neighbours and elderly friends.

Percy Runnells was born in Elora, April 9, 1920. He was brought up, one of nine children, by his grandmother, living at 75 Price Street, the red brick house built in 1845 for James Allan, blacksmith and farrier. In later years he often painted the Mill across the way. He attended Elora High School, in the present Junior School building. Already he was taking art lessons by correspondence, and he would likely have seen the annual shows of the Ontario Society of Artists which came to the area.

Runnells enlisted in the Argyll and Sutherland Highlanders for active service in the war, becoming a corporal. He was stationed at Nanaimo, then in Jamaica from which he sent tropical scenes back for exhibition in Elora. Sent overseas, he was hit in the knee by shrapnel in action at the Falaise Gap, France, leaving him with a lifelong disability. Runnells was invalided to Christie Street Veterans’ Hospital, Toronto, where fortunately art was looked upon as therapy, and a room was set up where veterans could paint at any time. He learned a good deal about perspective, line and colour, and met Louise Paul, a former student of Arthur Lismer of the Group of Seven. Her portrait bust in black of Runnells from this time shows a handsome, fine featured and sensitive young man.

After discharge, he continued studies at the Ontario College of Art, graduating as an associate in 1950. In Elora he built a studio in his grandmother’s woodshed and exhibited in store windows and Carnegie Hall. His paintings of people of Elora, square dancing, playing hockey and walking on the streets, as well as local landscapes were reproduced in “Saturday Night”, and won him Honourable Mention in the O’Keefe Competition.

He worked at Beatty Brothers from 1951 to 1961, mounting exhibits and displays with Russ Plyley, Edward Hotson and Les Taylor, enjoying the company of fellow local artists. During this time he also taught beginner classes and experimental graphics courses at the Doon School of Fine Arts in the summers of 1956 to 1961. At night he taught Art for the Board of Education in Fergus, Mt. Forest and Drayton.

He remained in Elora despite pleas by friends like Charles Comfort to go elsewhere, because of his grandmother. It was a great disappointment to Runnells that he could not buy the house on Price Street when it was put up for sale. For a short while he lived next to the old town hall, in central Elora, then he put up a prefabricated Muttart home on a lot at the corner of John and Moir Street. He built on a porch, filled his house with his paintings, and held a show here every two years.

When Beatty Brothers closed down, he worked as a designer and layout artist at CKCO TV, Kitchener from 1962 to 1974.

With the opening of St. Margaret’s School for girls in Elora, Runnells’ good friend Shirley MacRae urged him to take a position teaching Art. His wonderful creativity and imagination must have influenced many children.

He produced woodcuts for school programs, and each Christmas sent original watercolour cards of local scenes to his friends. He designed two memorial windows for St. John’s Anglican Church, and produced a series of watercolours of the churches of Elora, later made into a calendar.

In later years his works were becoming more simple. His bookshelves held many artbooks on artists such as Bonnard, Edward Hopper, Barker-Fairley and Japanese prints. On the walls were bright Bermuda flowers and abstracts related to nature. There were few figures in his paintings outside of the Virgin and Child at St. Mary’s School. He frequently painted his favourite flower, Queen Anne’s Lace. The last canvas on his easel was of the lighthouse at Kincardine.

The Wellington County Museum has acquired three large oils, which will be permanently displayed: The Fergus Train Station, and two of joyous colour and freedom of execution: “Mill Street Elora” from across the river, and the turn of the road at the Salem bridge. His last palette and easel will also be displayed at the Museum, in tribute to an Artist who truly loved his home area.

As Canon Hulse said of Percy Runnells at his funeral, using the quotation on the Memorial to Sir Christopher Wren in St. Paul’s, London, “If you seek his monument, look around you.” Through
his brush he has caught our village and countryside in timeless elegance of line and colour.

It is heartening to go into many homes and see cherished paintings by Percy Runnells, portraying the streetscape or house of the owners.