Paul was a longtime, dedicated employee of CKCO Television for 18 years. He was also an enthusiastic member of the K-W Flying Dutchmen.

Beloved husband and best friend of Sandra (nee Sloan) and loving father of Braedon; dear son of Charles and the late Shelagh Reekie of Mactier; special son-in-law of Tom and Eileen Sloan of St. Columban; dear brother of Christopher and his wife Sharon of Dartmouth, N.S., Andrew and his wife Tina of Cold Lake, Alta., Brendan and his wife Leanne of Kitchener, Meredith McCaffrey and her husband Blair of Parry Sound, brother-in-law of James and Doug Sloan, both of Vancouver, Joyce Devereaux and her husband John, Terry Sloan and his wife Peggy, all of Seaforth; Loved uncle of Elizabeth Reekie, Terri Lyn, Kristen, Deanna and Sarah Devereaux.

Friends and relatives may call at the Ratz-Bechtel Funeral Home, 621 King St. W. Kitchener on Tuesday from 2-4 and 7-9.  Funeral and committal services will be held in the chapel on Wednesday at 2:30 p.m. with cremation to follow.

As expressions of sympathy, donations to the Canadian Diabetes Association or the Heart and Stroke Foundation of Ontario would be gratefully acknowledged. 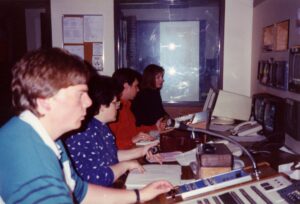 Memories of Paul – by Bob Tiffin and Kathy Fedy