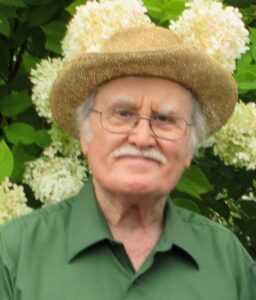 Mike was born in London, England on April 16, 1939 and as a child, he experienced the effects of the Blitz during WWII. In 1947, he and his parents emigrated to Canada and took up residence in North Bay, Ontario.

In 1958, Mike joined staff at CKGN-TV in North Bay; in 1962 he moved to Kitchener, Ontario working as a Technician at CKCO-TV.  In 1964 he was hired by CFTO-TV in Toronto as an Audio Operator and worked his way up to become one of their three top audio men, doing sound for many of the musical variety shows and remote broadcasts produced for the CTV Network. In 1967, he worked on Canada’s first colour television transmission.

In 1970, Mike left Toronto and drove out to Vancouver.  After working as an Assistant Soundman on three Hollywood movies being shot in the Vancouver area in 1970 – The Grove, later released as A Name for Evil; The Return of Charlie Chan; McCabe and Mrs. Miller, he joined CBC Vancouver staff in 1971 as a Film Sound Technician. Mike met his future wife Peggy O’Neill at CBC in 1971 and they married on July 15, 1972. Mike continued his work in film recording and sound effects until 1991 when the department was closed down and he was assigned to the news’ studios.  Mike and Peggy both retired in 1995.

Annual vacations were always spent travelling during the working years with photography being a major component whether to the U.K., Bermuda, Jamaica, various parts of the U.S. or within Canada.

In retirement, the couple moved to Maple Ridge, B.C., where Mike fulfilled a long-held dream to have his own yard and garden.  He enjoyed always having “something to do” around the house, whether feeding/watching/photographing the birds that are constant visitors, oil painting, reading, e-mailing friends, and writing articles and nostalgia quizzes for the CBC/SRC Association.  He was also constant support and help to Peggy as Secretary of the Association.

Mike was predeceased by his parents Gus & Elsie Oldfield.  He is survived by his loving wife of 50 years, Peggy, as well as cousins and their families in the U.K., France, Australia and New Zealand.

A Celebration of Life for Mike will take place on Sunday, October 23 in the main dining room of the Royal Vancouver Yacht Club, 3811 Point Grey Road, from 1:00 to 4:00 p.m.  Please RSVP Peggy if you are able to attend.

Flowers are welcome for the funeral but if you prefer to make a donation in Mike’s memory, he would have been delighted with support for Ridge Meadows Hospital Foundation, 11666 Laity Street, Box 5000, Maple Ridge, BC V2X 7G5 or https://rmhfoundation.com/donate/  or Katie’s Place,10255 Jackson Road, Maple Ridge, BC V2W 1G5 or https://www.canadahelps.org/en/charities/katies-place-domestic-animal-resource-and-education-society/