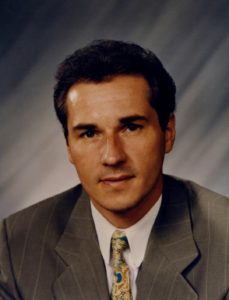 Mike passed away after a lengthy illness on Thursday, April 4, 2013 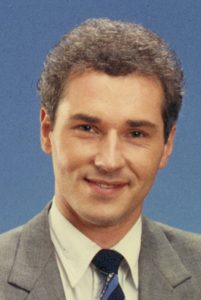 at the age of 57.  Born on December 1, 1955,  Mike was living in Santa Monica, California with his wife Heather MacPherson at the time of his death. A memorial service was held on Sunday April 7, 2013 at 1:00 p.m. at The Little Chapel of the Dawn, Gates, Kingsley and Gates Funeral Home, Santa Monica, CA.

CAPsule October 1989 – Mike started working at CKCO-TV in early September of 1989 after stops at CFTO-TV, CKVR-TV, CHUM-AM and CHUM-FM, CFTR-AM and other stations in Winnipeg, Huntsville and Chatham.  Mike started at the station on the Noon Report as co-anchor with Julie-Marie Innes.  Mike’s wife (Heather) works at a major ad agency in Toronto so they moved to Mississauga (from downtown Toronto).

CAPsule October 2000 – In a blast from the past…..former Anchor Mike Yaworski reports from New York City…..”I’m working for an ABC program called “Business Now” in which I’m one of their correspondents.  Hard to believe but I’m actually on air in New York, Chicago, San Francisco, Washington and a couple of other markets.  The work is quite intense….and extremely challenging because it’s all about emerging technologies.”