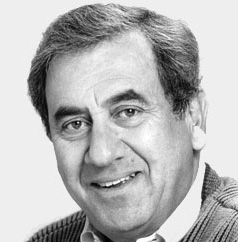 Lawrence S. (Larry) Solway – Peacefully on January 9, 2012 at Toronto General Hospital at age 83. Larry beloved husband to Shirley for 62 years. Loving father to Joseph (Juanita) and Beth Savard (Richard). Cherished Papa to A.J., Michael, James, Philip and Rachel. Dear brother to Nancy (Harvey Bokser) and brother-in-law to Judy (Hy Goldstein). Missed by many nieces and nephews. Larry worked extensively in radio, television, on stage, in print and pioneered open-line radio in the 1960s. He was an avid sailor, reader and world traveller. Friends may visit at the Visitation Centre in Mount Pleasant Cemetery, 375 Mount Pleasant Road (east gate entrance), after 12 noon on Friday, January 13th followed by a celebration of life in the chapel at 1 p.m. Larry’s family would like to thank the staff at Princess Margaret and the Toronto General Hospitals for their care and support. A special thank you to Dr. Barbara Vari for her special care. In lieu of flowers, donations to the Canadian Cancer Research Foundation would be appreciated.

The following information is courtesy of Larry McIntyre  – Solway was ‘one of us’ as an alumnus of CAP Communications. Solway began his career as a broadcaster on air with CFCA, when Carl Pollock first put CFCA on the air as a short-lived FM station – Canada’s first FM station actually – before Pollock launched his television broadcasting operations. Solway’s audience included riders on Kitchener’s bus system, carried by a CFCA speaker system on the buses. When the station ceased operations Solway returned to Toronto, but cohort George Moskal moved to what was being organized as CKCO-TV, and his lifelong career in television. Pollock revived his interests in FM broadcasting and CFCA once CKCO was up and running.