His grandfather brought with him from Germany the old family violin, so it was expected that the boy would continue the family tradition and play the instrument.

When he was fifteen, he entered an amateur contest that was being held at a local theatre. He chose to do “Swiss Moonlight Lullaby”; it won him first prize and he continued to feature the song in his shows.

The theatre owner was impressed enough with this new talent that he told him to form his own band and he would give him a job. And that he did. He formed and all-female band. He billed himself then as Yodelin’ Kidd Baker and His Texas Cowgirls”. The band became quite popular and was doing the usual personal appearances you might expect of that era – public dances, parties, exhibitions and the like.

In 1937 he made his radio debut on CFNB Fredericton and played dance halls with a local band until 1940.

He volunteered for military service in World War II but failed his medical and for a time worked in a bakery in Woodstock. He formed his Maritime Ranch Boys (he played guitar and sang lead vocals) and throughout the war years played dance halls and army bases both in Canada and over the US border in Maine, sometimes working with other Canadian acts including Hank Snow and Big Slim, The Lone Cowboy. In 1945 Baker formed the Kidd Baker Show, which featured his singing wife, Ada, and his brother Bob, and initially Glenn Carson, a 12-year-old fiddling sensation. He concentrated his shows in the New Brunswick area and soon became a popular radio act. After two years, he moved his operations to Ontario, initially spending some 10 years based at Kitchener before moving to Hamilton where, in the early 50s, he made his first recordings for Gordon Thompson’s Gavotte label (he had recorded numerous radio transcription discs at various stations but no actual records). In 1954, he became a regular on the new CHSJ-TV until 1955, when he bought a restaurant in Woodstock. He made further recordings in 1956 and 1957 for Thompson’s Quality label. 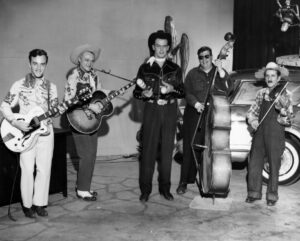 Around this time Kidd, Ada and all were spending summers in New Brunswick and winters in the Kitchener, Ontario area. It was reported in July of 1956 that Kidd Baker leaves his show at Kitchener’s CKCO-TV to start his tour through Quebec and the Gaspe Coast to the Maritimes. Come Ontario he would be seen on CHSJ-TV in St. John, New Brunswick with a 28 week sponsored show.

One of the featured members of the Pine Ridge Mountain Boys around 1957 was a nineteen year old named Freddie McKenna from Nashwaaksis, near Fredericton. Freddie was blind since birth but one article says he was ‘…practically a complete show by himself.’. He played the fiddle ‘southern style’ to get the crowd going and played the guitar and did vocals as well. But he had a different way of playing the fiddle and guitar by placing his hand over the fingerboard area rather than under it. He gained a lot of admiration from the local musicians. Freddie was a bit humble about the attention he got and noted, “I’ve never seen a guitar played any other way.”

Baker’s show played a regular weekly programme on CFNB, where he had made his debut, until his wife died from cancer in 1961. He soon sold the restaurant and in 1973, he retired from music.

During his career, Baker wrote several popular songs, the best-known being ‘Wheeling Back To Wheeling’ popularized by Doc Williams. It perhaps surprised many people when he later married his dead wife’s sister and settled at Arthurette, New Brunswick. (His brother Bob moved to Kitchener and started an upholstery business.) Baker never secured album releases during his career but in 1986, compilations of his Gavotte and Quality recordings were released by a German label. The recording quality of Thompson’s originals was not great but they enable one to hear this once-popular Canadian artist. 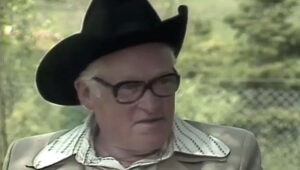 CTV Atlantic Report – N.B.’s Kidd Baker played his way into the hearts of Canadians from coast to coast