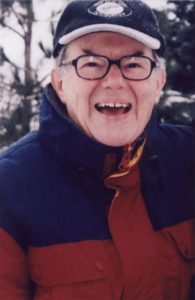 With much regret and great sadness we announce the death of John. He was not ready to say good-bye and we were not ready to accept that we will not hear his laughter again. He was a joyful presence to many, many people and we were lucky to be a part of his life. He was the partner and best friend to Beverley for over 50 years. He was the proud and loving father to Suzanne and David, and the loving grandfather to Daniel, Matthew and Lara ­ the joy they brought to his life knew no bounds. John was fortunate to have a loving and caring relationship with his only brother Bill and his special cousin Andy Blew.

John’s professional life was always involved with Communications. Something he loved doing and he shared his wisdom with many young people in the industry over the years. It is impossible to list all of the people John has touched in his 71 years, or all of the things that meant so much to him. His accomplishments were numerous, although ­ with true Spragge humility ­ he would deny it. His first full-time job (1958-68) was as one of the first rock & roll disc jockeys on 1050-CHUM. After a few years with the Radio Sales Bureau and Standard Broadcast Sales, he began 13-years as Program Director of 1010-CFRB.

John completed his career in Broadcasting in Kitchener, Ontario at CFCA, CKKW and CKCO T.V. His years in Kitchener were interesting and rewarding and he made lasting friendships. John wrapped up his career as a public speaker and consultant. He addressed meetings, conferences and conventions across Canada and even in India ­ a memorable experience. Throughout, John always found the time to use his talents to help those in need; walking in the very first March of Dimes, playing Santa for the Rotary Club, working on restoration projects for summer camps dedicated to children with special needs, and building homes with Habitat for Humanity, to name just a few. John will also be fondly remembered as an entertainer ­ among his family and friends, and notably for his more than 25-years of weekly News Updates at the Rotary Club of Toronto. In 1985 John was given Rotary’s highest honour, a Paul Harris Fellowship and William Peace Award. In 2008 The Rotary Club of Toronto awarded John a second Paul Harris Fellowship ­ only the 2nd time in the club’s 96-year history for this to occur.

Thankfully, John was fortunate to spend a number of years in retirement ­ traveling the world, enjoying the activities he loved most, and spending time with the people nearest and dearest to him. John’s mis-directed shots will be missed both on the curling ice and on the golf course.

The family would like to thank the exceptional support of Dr. Lawrence Klotz and his team at Sunnybrook Health Sciences Centre. A special thank you to Rev. Ken Gallinger of Lawrence Park Community Church. In lieu of flowers, the family asks that if you wish, you may make a donation to the Rotary Club of Toronto Charitable Foundation, Royal York Hotel, 100 Front Street West, Toronto M5J 1E4 or the Palliative Care Unit at Sunnybrook Health Sciences Centre, 2075 Bayview Avenue, Toronto M4N 3M5. The family will receive friends at the HUMPHREY FUNERAL HOME ­ A.W. MILES CHAPEL, 1403 Bayview Avenue (south of Eglinton Avenue East) from 1:00 ­ 4:00 p.m. and 6:00 ­ 8:00 p.m. Sunday, December 21st. At a later date there will be a Memorial Service celebrating John’s life. Condolences and memories may be forwarded through www.humphreymiles.com.