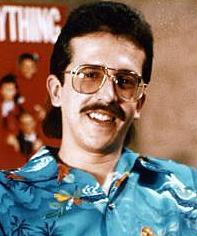 John David Geffros – Born in Kitchener on September 16, 1956 and died in Waterloo on July 12, 2007.
Beloved son of Catherine (nee Hinsperger) and the late Eugene Geffros (1985). Loving brother of James and his wife Paulette of Oakville, Michael and his wife Cora of Port Huron, Michigan and Mary and her husband Norm Emptage of Kitchener. He will be fondly remembered by his nine nieces and nephews.
Predeceased by his brother, William (2005).
John was a former owner of Records On Wheels in Cambridge, then worked at Kool FM as a sales employee. He was a life time sports fan with a particular passion for golf. He was actively involved with A.A. where he was a member and sponsor.
The Geffros family will receive relatives and friends on Thursday, July 19, 2007 at St. Mary’s RC Church for John’s Memorial Mass at 10am. Cremation has taken place.
As expressions of sympathy, donations to St. Mary’s Church Building Fund would be appreciated by the family. Cards will be available at the Church before the funeral or the Henry Walser Funeral Home, Kitchener