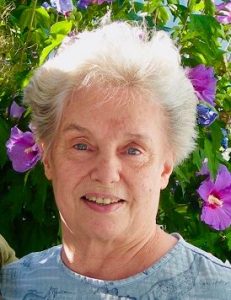 Her family is sad to announce the passing of Joan Margaret McCullagh on Friday March 1st at the Southampton Hospital.  Joan was born on 14 October 1935 in Cobourg, Ontario to Gordon McCullagh and his wife Daisy nee Avery. She joined the Air Force in order to put herself through the University of Guelph – graduating from MacDonald Institute in the Class of ’57. She was a High School Home Economics teacher retiring to beautiful Southampton, Ontario in 1999.

Services will be held at St. Paul’s Anglican Church, Southampton on Friday May 3rd, 2019 1:00pm followed by interment in Southampton Cemetery. Celebrations will follow at the Walker House, High Street, Southampton. Donations may be made in her memory to Grey Bruce Animal Shelter.