Mrs. William Davidson, 20, the former Joan Hilker of Kitchener, was killed last night in an automobile accident in Florida. The former football beauty queen (Miss Kitchener-Waterloo, Miss Dutchmen in the 1955 Grey Cup beauty contest) died a half hour after the car she was driving collided with a truck in Hollywood, Florida. Her 27-year-old husband is reported in “deep shock” in hospital, but suffered only minor injuries. Hollywood police said he will be told of his wife’s death today.

The couple were married in Waterloo Friday night. They were enroute to a Hollywood hotel when their car was struck by a delivery truck which swerved to avoid collision with a car which had passed on the right. Struck just forward of the driver’s door, the Davidson’s convertible was hurled backward about 50 feet Hollywood police said. The driver of the truck, Howard Coles, 19, of Fort Lauderdale, Fla., is being held for questioning.

Mrs. Davidson was a secretary at Gairdner and Company Ltd. before her marriage. She was well known as a fashion model and was also familiar to television viewers, being employed on a part-time basis by CKCO-TV.

Mr. Davidson is an employee of a brokerage firm in London, Ontario. His parents are Mr. and Mrs. Wilbur Davidson of Peterborough.

Besides her husband, Mrs. Davidson is survived by her mother, Mrs. Marjorie Hilker, 351 Luella St., and two sisters, Gail and Georgene, both of Kitchener. She was predeceased by her father, George C. Hilker, on June 16, 1953.

The body, on arrival from Florida, will rest at the Ratz Bechtel Funeral Home. Funeral arrangements are incomplete. 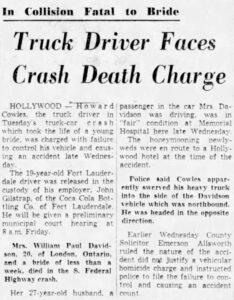