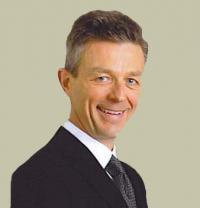 We lost Jim at the height of his life when he died peacefully in Toronto on May 3, 2007 with his wife beside him and extraordinary love all around. He died after only two and a half months of illness having had remarkable health and running six marathons on five continents over the past three years. Beloved husband of Lisa Ramshaw and devoted father of son, Daniel, and stepson, Aaron; he was cherished by all friends and family. Jim will remain forever within us. Jim’s life was active and rewarding. He was a highly acclaimed journalist, covering news worldwide and then was a founding member of Business News Network (BNN), where he was well known for his show `Market Call with Jim O’Connell’. Jim won many awards including two Geminis. His colleagues have described him as a mentor, a coach, a friend and a great man. He will be missed by all. To celebrate his life, a memorial service will be held in ST. CLEMENT’S ANGLICAN CHURCH, 59 Briarhill Avenue, Toronto at 10 a.m. on Saturday May 12, 2007. If desired, donations may be made to the Canadian Cancer Society, 20 Holly Street, Suite #101, Toronto, M4S 3B1. Condolences and memories will be forwarded through www.humphreymiles.com

“It’s such an irony that [Jim O] should die of that disease,” Mr. Keeping said. 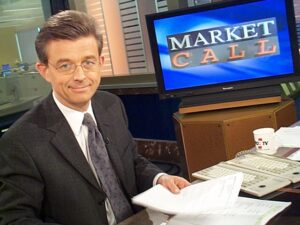 “He had that test every year for the rest of his life.” Like Mr. Keeping, he described Mr. O'[Connell] as “a class act,” adding that he was “one of the finest men and finest journalists I’ve ever met — never a nasty word about anyone, always a cheerful hello, always a cheerful goodbye.” “He was the ultimate professional,” Mr. [Mike Omelus] said. “He was interviewing leading CEOs and newsmakers, and he’d really do his homework beforehand. His research was deep and he was never sensational in his approach.”

Yesterday, colleagues remembered TV journalist Jim O’Connell as a fine man and a journalist’s journalist. “Jim was just a class act in every way,” recalled CTV Ottawa news anchor Max Keeping, who hired Mr. O’Connell at what was then known as CJOH TV in 1982.

“From the beginning, I was struck by how intensely he looked at the meaning of being a journalist. He was meticulous about detail and knew that only credibility could take him any distance in this field — and with this wisdom, you knew Jim was going to be a great one.”

Mr. O’Connell, a Prescott native, remained at CJOH until 1988, when he became a news anchor for Global Television. From there he became, among other things, the CTV bureau chief in Washington and in London, and then a host of CTV’s W5 news program. Eight years ago, in a change of pace, he moved to BNN, the Business News Network, where he had recently been host of the popular show Market Call.

Mr. O’Connell, 48, died of cancer Thursday morning in Toronto after an illness of less than three months.

His avocation as a broadcaster had come from a priest at St. Mark’s Catholic Church in Prescott, where the young Mr. O’Connell served as an altar boy. Father W.P. Healey told him his voice could open doors in the broadcasting field — and when, in high school, he began pondering his future, he remembered the advice and chose to enrol, after graduation, in the journalism program at Conestoga College in Kitchener. He helped pay his way through college by spinning discs at a country music station.

At 18, he began a two-year reporting stint at CKCO TV in Kitchener. At 20, at CFJR-FM in Brockville, he became the youngest news director in Canada. From there on, his ascent was steady. “I always marvelled at his notebooks,” Mr. Keeping recalled yesterday. “It was full of sources and Jim worked the phones constantly. “And yet, you wouldn’t say Jim ever took himself too seriously. He was a fun guy to be with and always saw the light side of things.”

One of Mr. O’Connell’s most memorable series at CJOH encouraged viewers to have regular hemocult tests, which show if there is any blood in the stool, a frequent sign of colon cancer, the illness that Mr. O’Connell was diagnosed with in mid-February. “It’s such an irony that Jim should die of that disease,” Mr. Keeping said. “He had that test every year for the rest of his life.”

At BNN in Toronto, the staff was deeply stricken by news of their colleague’s death, said executive producer Mike Omelus. Like Mr. Keeping, he described Mr. O’Connell as “a class act,” adding that he was “one of the finest men and finest journalists I’ve ever met — never a nasty word about anyone, always a cheerful hello, always a cheerful goodbye.” Mr. Omelus said Mr. O’Connell’s coming to BNN gave credibility to the network in its fledgling days. “He was a gifted storyteller and his humanity shone through in the reporting he did.”

Mr. O’Connell did not come as an experienced business reporter but quickly developed mastery of the subject. “He was the ultimate professional,” Mr. Omelus said. “He was interviewing leading CEOs and newsmakers, and he’d really do his homework beforehand. His research was deep and he was never sensational in his approach.” From the response last fall when Mr. O’Connell spent a week hosting Market Call at BCE Place on Bay Street in Toronto, it was apparent that his audience, no less than his colleagues, appreciated his professionalism. “I was touched to see how many viewers actually came out to greet him,” Mr. Omelus recalled. “People swamped him at the end of each show, and I was touched to see that warmth, that proof of his impact.”

BNN had only mentioned his death once or twice on air yesterday, but Mr. Omelus said the network had received close to 500 e-mails from distraught viewers by 4 p.m. Mr. Omelus said his late colleague’s success on television was easy to explain: “Besides the professionalism, Jim was himself — he seemed like a nice guy and was, seemed intelligent and was, seemed compassionate and was. Viewers know these things.”

In his CTV incarnation, Mr. O’Connell had covered many great stories –the Clinton White House, the first Gulf War, the Bosnian war, Hurricane Andrew’s devastation of Florida, the Dunblane massacre in Scotland, the Rwandan refugee crisis and many others.

He won three ACTRA Awards for Best reportage/Best documentary, two awards from the Radio-Television News Directors Association of Canada, and was twice nominated for Gemini Awards.

He and his second wife, Dr. Lisa Ramshaw, were athletes who had run marathons on five continents, including Antarctica, in the past 18 months and had planned to do the other two this year.

Mr. Keeping had visited Mr. O’Connell in Toronto on Tuesday. “He was facing things with a quiet courage and dignity. He was fragile, but still had a smile and a twinkle.” Still an organizer, he had planned his memorial service, at which both Mr. Keeping and CTV anchor Lloyd Robertson will speak. Forty-eight is far too young to die, Mr. Keeping said. “But even there, Jim remained a class act. He said his few years with Lisa had been wonderful. “And as I was leaving, he said, ‘Max, I hit the jackpot — I had a really good life’.”

The memorial service will be held on Saturday, May 12, at St. Clement’s Anglican Church, 59 Briar Hill Ave., in Toronto.