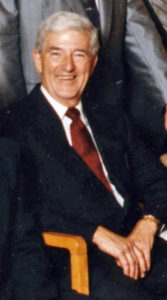 Predeceased by his brother Frank Liddle and his sisters Elizabeth Watt and Jane White.

Jack was a longtime devoted member of St. Mark’s Lutheran Church and a proud veteran of the Royal Canadian Navy. Friends are invited to share their memories of Jack with his family during visitation at the Erb & Good Family Funeral Home, 171 King St. S., Waterloo on Thursday, January 12, 2017 from 2-4 and 7-9 p.m. The funeral service will be held at St. Mark’s Lutheran Church, 825 King St. W., Kitchener, on Friday, January 13, 2017 at 11 a.m. Cremation to follow. A reception will be held in the church hall.

Condolences for the family and donations to oneRoof or St. Mark’s Lutheran Church may be arranged through the funeral home at www.erbgood.com.

On a dreary May afternoon, visiting the Liddles (and their black lab Lucy) was a welcome retreat with their warm hospitality in their comfy Wellesley home. “Love is in the details” is a popular phrase today and is very applicable to the full and faith filled lives of Jack and Bernice.

Bernice’s parents were Agnes (Godbold) and William Bindernagel. He was born in Germa

ny and she in Washington (Oxford County), Ontario. They were married in 1909 and lived in Shantz Station beginning their family in 1912 – Harry, Edna, Audrey, Bernice (1928) and Richard. Three others were lost in infancy (buried in Mt. Hope Cemetery at the Bindernagel family monument). Today, Bernice and Richard are the surviving siblings. William was a house painter and paper hanger and worked for a while in a local sugar beet factory. Since they weren’t a farming family, Bernice recalls being treated as “an outsider” in the community. This extended to the one room schoolhouse. So to help, her teacher Mrs. Hergott, decided Bernice could accelerate to grade three. When Bernice was “around seven”, the family moved to Pearl Place, Kitchener. A second-hand piano was purchased. She took lessons from Edgar Merkle (organist of Historic St. Paul’s Lutheran Church on Queen Street). Bernice studied “commercial” courses that were the popular for girls at K.C.I. until graduation. Using what she had learned, her first job was as a “Gal Friday” with bookkeeping responsibilities at Woelfle Shoe Company (Victoria Street across from the Huck Glove Company). Like many teens of the day, she enjoyed Saturday matinees at the local theatres preferring Gene Autry, Roy Rogers/ Dale Evans westerns. Moving to Kitchener allowed her dad to occasionally work with his brother who operated the popular A. Bindernagel Painting Company. Bernice remembers his white truck with the family name on its side. Ernst Bindernagel (Bernice’s uncle) was a charter member of First English Lutheran Church – on the list of “87”. At fourteen, she was confirmed by Dr. Jacobi and ever since has diligently served St. Mark’s in many areas for many years such as: teaching grade five Sunday School and some upper grades with Rhoda Myra, VBS, Altar guild, Worship Committee (as well as Chair), choir, Stephen Minister, home communion server (with Jack) and varied kitchen duties including funeral receptions coordinated by Vera Bindernagel, Jackie Farnham and Fay Albrecht.

Jack’s father Gilbert Liddle came from England (circa 1902). He was ten and orphaned which labeled him a “home boy”. He lived and worked on a farm in Elmwood, Ontario located 10km. north of Hanover. It was a harsh life at a young age. After serving in the army and fighting in the Battle of Vimy Ridge, Gilbert “rode the rails out west” and returned to Toronto where he met and eventually married Ruth Tinning in 1922. There they became fast friends with Clyde Mitchell. All soon moved to Waterloo where their lives were about to change in a grand new direction. The age of radio was gaining popularity in Canadian homes. The Liddles began a family with Betty, Jack (1926), Isabelle, Frank and Jane (who passed way in 2001). In 1944 Jack joined the Navy and was stationed in Halifax. Just as “they were ready to go to Japan”, the War came to an end. For another four years he continued serving on the HMCS Micmac. In 1929, Gilbert and Clyde founded and owned K-W’s radio station – CKCR (forerunner of CHYM). It was located in the Arcade Building on King Street (across from the Lyric Theatre). Carl Pollock (son of Electrohome’s founder) and CKCR brought Famous Players Theatres into the fold and applied for a license to operate a television station in Kitchener (CKCO). Upon returning home from Halifax, Jack sold advertising for the radio station and there, in 1947, he met a stenographer – Bernice Bindernagel. Jack continued to sell advertising for a few years with the radio station an in 1961, joined CKCO TV to do the same until his retirement in 1991.

Baptized at King Street Baptist Church (King/Water Streets) Jack was “brought up Baptist”. To become a Lutheran, and a member of St. Mark’s, he took confirmation instruction from Dr. Jacobi. In June of 1949, he and Bernice wed, and with Fred Lincke’s approval, Edgar Merkle played at their wedding. The Liddle’s first home was in City View Apartments (Church Street). Jan was born in 1950, followed by John, Mark, Robyn, Paul, Mary-Kathryn, Andrew and Beth. Both recalled the many wonderful homes they lived in around K-W and their Port Elgin cottage where Jack was on the committee to build Faith Lutheran Church. Even though the cottage was sold in 2002, they stay connected with many long time friends because son Andrew, and his family, reside in Port Elgin. Like Bernice, Jack’s service to St. Mark’s extends over countless hours and many years: Council (as well as Chair), ushering (Chair post Fred Hammer), Stephen Minister, Property Committee (Chair too) and the LCA Witness Committee (circa l970’s). When our Sunday School was bursting, superintendent duties were divided to handle all the classes. Jack supervised grades three and four. Both warmly remember Pastor Jensen. Jack remarked how organized he was to ensure “committees worked”. Additionally, how Pastor Zimmerman could get “all fired up” preaching. His face would become “scarlet red”! Like many others, lots of recollections about Dr. Jacobi too.

Today their eight children, twenty grandchildren and three great-grandchildren live all over – South Carolina, Vancouver, St. Paul, Alberta, Kingston and K-W. Bernice remarked, “they wish everyone didn’t live so far away but this is the way it is”. Grandsons Chris and Tim have served in the Canadian military and both have gone to Afghanistan twice.

I began this article mentioning “love is in the details”. After sharing portions of their lives, there is no doubt this phrase describes Jack and Bernice. Above their front door is St. Mark’s annual Epiphany 20CMB11 sign. This symbolically signals to all who enter that their home is blessed. Once you have visited, no one needs to see this sign to know how true it is for them and their whole family.