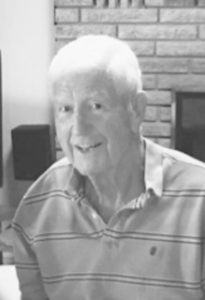 Jack Lanthier, 87, loved life and lived it to the fullest. With his loving wife Marge by his side for 23 years they shared in the joy of 9 children, Michelle, Peter, Jane, Nancy, Judy, John, and Anne Lanthier; Sue and Sandra Berreth, 9 sons-and-daughters-in-law; 15 grandchildren and 9 great grandchildren! Jack was predeceased by Joan Lanthier with whom he shared 38 years of marriage and some 65 Tessaro relatives. Jack was one of four and his brother Bob and sisters, Joan and Phyllis adored him. After graduating from the University of Guelph, Jack was tapped by a new television studio to write and star in their first agricultural production called “Over the Fence.” His keen business acumen and a successful career at Dow led to the establishment of Agrospray which he owned and operated for 35 years. Jack is highly respected by his business partners and the community for innovating and championing change in the agricultural industry. During his working years he also chaired the Hospital and Police Services boards in Tillsonburg. Jack has been “retired” for 27 years keeping busy with travel, volunteerism, cottaging, painting, friends and yes – family. Jack was a thoughtful listener and intellect, always open minded and genuinely kind. The very best thing about Jack was the sparkle in his eye. He constantly looked on the bright side, had an enthusiastically positive attitude bringing much joy into this world. It was a life well lived and he was so loved! – Obituary

I also found this story about Jack in the The Coastal Star (by Emily J. Minor) on July 4, 2018 – The Coastal Star is a community of neighbors celebrating life along the shore of Ocean Ridge, Florida.

HIGHLAND BEACH — Jack Lanthier, 87, a widower who retired to Highland Beach with the second love of his life and spent 23 happy years here exploring, volunteering and traveling, died June 21 from complications of Parkinson’s disease. Of some comfort to the family was that Mr. Lanthier died on the day his mother had died in 1977. “I think she thought he’d suffered enough and it was time for him to come home,” said Marge Lanthier, who married Mr. Lanthier 23 years ago after she took a new job in Florida and he followed. Born in Toronto on June 2, 1931, Mr. Lanthier was plucked by corporate giant Dow Chemical upon his graduation from the University of Guelph in Ontario. Within years, though, he began to recognize the adverse environmental impacts of traditional pesticides. There were safer farming chemicals around, his wife, Marge, says now. But they were expensive to manufacture. “Jack and his buddy broke away and started (AgroSpray),” she said. “The company took off and today it’s still run by our grandson.”
Mr. Lanthier was married to Joan Lanthier for 38 years, and the couple raised their seven children in Ontario. After Joan’s death, Marge Lanthier happened to work with the Lanthiers’ daughter. “She told me she thought we would make a good pair,” Marge said of she and Jack. After being seated together at a fundraiser, the two clicked. Marge Lanthier said when she moved to Florida to take a job at St. Andrew’s School in 1994, Mr. Lanthier moved with her. At the time, Mr. Lanthier was in his 12th year of retirement and ready for a Florida lifestyle. “He loved the beach more than I did, I think,” she said. Marge and Jack Lanthier lived in Ocean Pines and Mr. Lanthier was a former board president there. He was also an active volunteer at the Highland Beach Library. And for many years he gave tours at the Boca Raton Resort and Club as a volunteer for the Boca Raton Historical Society. Mr. Lanthier also volunteered as a guide on the society’s boat tours. He also took up acrylic painting and spent many happy hours at the easel, Marge Lanthier said. Besides his first wife, Mr. Lanthier was preceded in death by a daughter, Jane Esseltine. She and her husband died in a plane crash and it is their son, Matthew, who now runs Mr. Lanthier’s company.
Mr. Lanthier’s surviving children are: Michelle Quintyn, Peter Lanthier, Nancy Lanthier, Judy Jarvis, John Lanthier and Anne Lanthier. All still live in Canada. Marge Lanthier’s two daughters, Sue Thompson of Montana and Sandra Berreth Pratt of Virginia, also survive him. Mr. Lanthier leaves eight grandchildren and 15 great-grandchildren.
An avid traveler who loved trains, Mr. Lanthier spent several weeks abroad in the spring of 2017 with his wife. The Japanese bullet train was a thrill for him, she said. His last train ride, however, was the Brightline to Miami. “He loved it,” Marge Lanthier said. “Of course, he would have liked it to have gone faster.”
Mr. Lanthier wanted only a party to remember his life, so the family held one a week after his death and is planning another in Canada for late summer.
Donations can be made to the charity of one’s choice, and the Highland Beach Library is planning to buy books Mr. Lanthier favored, his wife said.