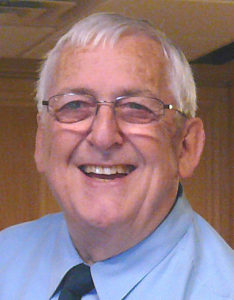 Dan retired in 2000, after 40 years as a radio broadcaster and teacher at Conestoga College. Dan started his career in radio in Pembroke ON, Fredericton NB and then took a job in Kitchener in 1961. Dan was a member of the Canadian Association of Broadcasters and was active in various organizations such as the Canadian Mental Health Association, the C.N.I.B., the Kinsmen Club, K-W Association of Disabled Adults. He was past President and charter member of The Oktoberfest Lion’s Club, past member of the board of the Hardy Hearts, he was active with R.E.A.C.T. in broadcasting emergency information; served on the Education Committee of the Kitchener Chamber of Commerce; worked and promoted activities for Big Brothers, Big Sisters, Canadian Cancer Association, House of Friendship, the Working Centre, K-W Association for the Deaf and Hard of Hearing, Waterloo Police Male Choir, Block Parents Program, Consumers Association of Canada, St. John’s Soup Kitchen, St. Monica’s House, United Way and Federated Appeal, Rotary Clubs of K-W, Freeport, St. Mary’s and K-W Hospitals, K-W Home Builders Association, the Arthritis Association, Management Boards of Holy Trinity and St. Johns Anglican Churches, MacDonald’s and M&M Meats Charity fund raisers.

Special thanks to Dr. Rinne and the doctors, nurses, and the Heart Function clinic at St. Mary’s Hospital, for their compassionate care.

Dan’s family will receive relatives and friends at the Henry Walser Funeral Home, 507 Frederick St., Kitchener, 519-749-8467 on Tuesday from 7-9pm and Wednesday from 12 noon-1:45pm. The memorial service for Dan will be held in the Funeral Home Chapel on Wednesday, April 7, 2010 at 2pm. Rev. Canon Pratt officiating. Interment Parkview Cemetery, Waterloo.

Expressions of sympathy donations may be made to the St. Mary’s Hospital Regional Cardiac Care Centre.
Visit www.henrywalser.com for Dan’s memorial.

You may not have known Dan Fish, but you probably knew his voice. If you tuned into local radio at all in the last 49 years, you probably heard him talking in your kitchen, in your car, anywhere the signals of CKKW, CFCA and CKWR would reach. He died this week at 75.

For decades, Fish known as Dan Fisher on air was as much a part of broadcasting in this region as transistor radios. He hosted cooking shows, buying and selling shows, morning shows, political talk shows, Kitchener Rangers hockey broadcasts, and much more. As a program director, he hired and mentored many people still in the business today. In the final years of his career, he taught hundreds of students in the radio program at Conestoga College. “I can’t imagine him doing anything else in his life. He was a natural,” said Paul Scott, director of the radio program at Conestoga College, who was given his start in the business by Fish.

The son of an AM radio operator, Fish began in radio at CHOV in Pembroke in 1956. Back then, he went by the name Dan Trout, and learned the ropes broadcasting from fall fairs up and down the Ottawa Valley. By 1958, he and his wife Gwen moved to Fredericton, N.B., where Fish was the morning man for CFNB. He hosted a travelling country music radio show and a popular talent show that featured soldiers from nearby base Gagetown.

In 1961, Fish’s voice became familiar to listeners in Waterloo Region, when he took a job with CKKW. He became known for his familiar, easy way of talking and was a genuine interviewer. Fish’s talent was bringing radio “to the people,” said former colleague Rych Mills, a producer at KOOL-FM. He took shows out of the studio and on the road, broadcasting from women’s bowling leagues, country jamborees and charity bazaars.

“He’d rather talk to somebody than spin a record,” said Mills, who once worked under Fish at CKKW. “And sometimes he’d get a lot of flak from his bosses for that.” By 1994, Fish was teaching students at Conestoga, but he didn’t leave commercial radio behind. As recently as last year, he was still writing and producing Christmas programs for CKWR. Fish never lost that natural warmth, say colleagues. “On the air and off the air, he was the same person. He didn’t put on any false pretences. He truly loved life and he loved broadcasting,” Scott said. “He loved entertaining and he loved informing people. He had an enormous influence on the people around him.”

Fish remains a father figure and mentor for many people who learned under him. At Conestoga, he was “a huggy bear,” a big man who was affectionate to students and faculty, said Professor Mike Thurnell. He was also organizer of something called the Lunch Bunch, an informal group of former broadcasters who met about once a month, he said. “He was a personality in the truest sense,” Thurnell said. “They don’t make people like that anymore.”

Fish believed radio stations should be involved in their community, and worked to promote a long list of local charities, from Big Brothers and St. John’s Soup Kitchen to House of Friendship and the United Way. His family said they’ve been moved to learn how much he influenced local radio. For them, he was always a lighthearted, “crazy grandpa” and a collector of gadgets, they said, but they didn’t realize how much his coaching of other on-air personalities had meant to people.

“It’s been uplifting hearing that,” said his son Dave Fish, the youngest of four children. “A lot of people consider him a father figure. It wasn’t just an on-air thing. That’s who he was.” A funeral is planned for 2 p.m. Wednesday at the Henry Walser Funeral Home. Visitations begin tonight at 7 p.m. and Wednesday starting at noon.