We are heartbroken to announce the passing of Bill McVean, who died on March 21st, following complications from multiple strokes. Bill was born on May 5, 1925 in Windsor, Ontario, to Marion and Ernest McVean. He was educated in Woodstock, Ontario, before serving with 411 RCAF spitfire squadron in France, Belgium and Holland.

The war’s end found him in Germany, where he 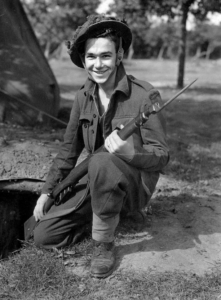 relieved the boredom by editing an armed forces newspaper and managing a radio station. After his return to Canada, Bill studied journalism and became news editor at Radio Station CKNX in Wingham, Ontario. A year later he married highschool sweetheart Catherine Flood and moved to Hamilton, Ontario, to Radio Station CKOC (1949 to 1955), then CHML (1955 to 1960). While at CKOC, Bill became the first person in the world to do live aerial traffic reports from an airplane which he also piloted. He had begun flying at age 12 under the instruction of First World War fighter pilot Tom Williams.

In 1960, Bill began his storied career at CFRB radio in Toronto, where he was a fixture until 1986. During his time at CFRB, Bill did stints at CBC television and narrated and performed in many aviation films, while also appearing in TV commercials. Aviation was a huge part of Bill’s life. He helped get Buttonville Airport off the ground, from a grass strip to a viable airport. A licensed commercial pilot with all of the endorsements, he flew more than 60 types of aircraft, from CF-5 fighters to Lear and Citation jets to First World War fighters. It was while piloting one such aircraft, a Nieuport Scout replica at an air show in North Bay, Ontario, that disaster struck when a structural failure caused him to crash, completely destroying both him and the aircraft. Miraculously, he survived after being airlifted to Toronto. During his six-month hospital recuperation, his room was wired so that he could continue doing his CFRB show from his hospital bed. 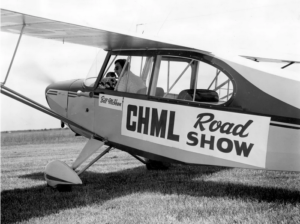 For more than 20 years, Bill was the man in charge of the Canadian International (CNE) Air Show. Beginning as the show’s announcer/emcee, he became Director and was also on the CNE’s board. He was well-known among the leadership of the world’s air forces, visiting the Pentagon frequently. On one such visit the general he was with pointed out that a Canadian McVean had received the Congressional Medal of Honour during the Civil War, fighting with the Union forces. That McVean, Peter, was actually a relative from Toronto.

Travel was also a major part of Bill and Catherine’s lives, and it spawned the syndicated radio feature “Trips n Tips”, written and produced by Catherine and voiced by Bill. The show was aired five times a week on 23 Canadian stations. Content was provided by a non-stop whirlwind of world travel and interviews. Catherine and Bill were founding members of the Travel Media Association of Canada.

Bill leaves friends from across Canada and the world. He will be remembered for his kindness, gentle sense of humour, decency and beautiful “radio” voice. That voice is now silent, but it will echo in our hearts. There will not be a service, but feel free to remember him for a minute and smile. No flowers please, but if you like you can make a donation to your favourite charity.