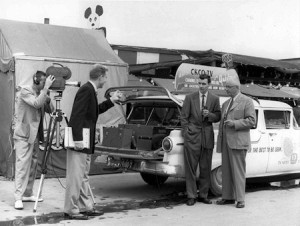 Gadabout was a weekly 15 minute feature produced by Ron Hill, one of only 5 general announcers on staff when I joined CKCO in the spring of 1957. The other 4 were Al Hodge, Tom Rafferty, Reg Sellner and myself.  Ron would line up people to interview and he and I and a cameraman, Jack Phillips or Ross Osler, would go out and I did the interviews.

Our venues were community events, agricultural shows, etc. and Fall Fairs were a favourite. We talked to civic officials, service club leaders and others. The purpose of the show, as I recall, was to take the TV station out into our coverage area, to introduce CKCO-TV CHANNEL 13 to a variety of communities and public events, to establish a TV station “presence” in those communities and to put our guests on television.. “on the air”.

The station management figured that if someone was interviewed for an on air appearance, that 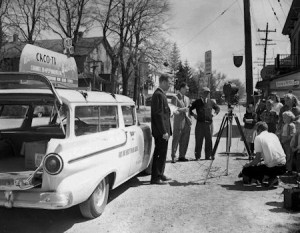 person, plus his/her families and perhaps many of their friends would be sure to watch the program, and the TV station CKCO-TV.  If they tuned in once, the odds were that they would tune in to other programs and thus become more frequent viewers of our s 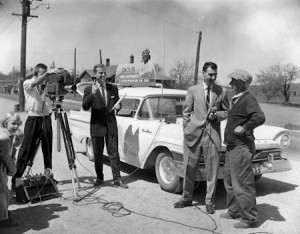 tation.  I think this purpose was achieved in many instances.

The interviews, were shot on 16 mm black and white film, on an Auricon camera that required 110 v. AC to operate.  Ancillary footage of the events etc, was shot either on the Auricon, a Bell & Howell or Bolex.   These were 16 mm silent hand held spring wound cameras and were the standard portable film cameras used by many TV stations at that time.  The Auricon sound at that time was known as optical sound and while quite good for the era magnetic stripe soon over took optical for tape recorder quality.

I can’t remember how long the Gadabout program continued…but I suspect it was not much more than a year or so.