Peacefully and with dignity in his 96th year, William Duncan “Bill” McGregor, 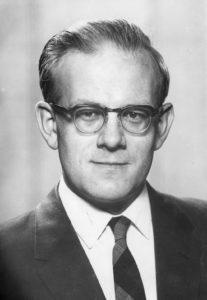 beloved husband of Ellen McGregor (predeceased), brother of MaryLou Watson, Bruce McGregor, Ivan McGregor (predeceased) and Merle Johnston (predeceased), father of Kelly McGregor, father-in-law of Keith Gillespie and loving grandfather of Kathryne and Robbie Gillespie. A career broadcaster, Bill started his career in radio at CFRB and CKFH. After a few eventful years in the Toronto broadcast community, Bill moved to Kitchener, Ontario to become the Operations Manager and eventually the President of CAP Communications Ltd. which at one time owned and operated CKCO TV, CKKW and CFCA radio. Active in broadcasting industry matters, Bill McGregor served with distinction as a President of the Central Canada Broadcasters Association (CCBA), President of the Canadian Association of Broadcasters (CAB), Chairman and Director of the CTV Television Network Ltd., a Director of Electrohome Limited and a Director of Rogers Multi-Media Inc. As a long time, Kitchener resident, he was a proud member of a number of community service groups including Rotary, Chamber of Commerce and Junior Achievement. Bill will be sadly missed by all who knew him.

Friends are invited to share their memories of Bill with his family during visitation at the Erb & Good Family Funeral Home, 171 King St. S., Waterloo, on Tuesday, December 4, 2018 from 12:00 – 12:45 pm. The funeral service will follow in the chapel of the funeral home at 1:00 pm. Private family interment at Parkview Cemetery, Waterloo and a reception at Westmount Golf Club to follow.

In lieu of flowers, condolences for the family and donations to St. Mary’s Hospital Foundation may be arranged through the funeral home at www.erbgood.com or 519-745-8445.

In an era when it was the prayer of every young broadcaster to end up at Toronto’s CFRB, Bill McGregor started there. From 1947 to 1950, he was a radio operator at ‘RB learning the trade under the tutelage of Bill Baker. In 1950, he moved down the street and up the dial to Foster Hewitt’s new station as Chief Engineer of CKFH. Then in ’51, to the CBC where, for two years, he was a TV instructor.

And then, he met Jack Fitzgibbons who, at Famous Players, with his brother Gene, was preparing the startup of Kitchener television station CKCO-TV. He invited Bill to join them. This he did in December 1953 as Operations Manager. CKCO-TV went on the air March 1, 1954.

The licensee company was founded as Central Ontario Television Limited – a partnership of Famous Players, K-W Broadcasting (CKCR-Radio) and Carl Pollock, President of Electrohome Limited. In 1962, the company acquired CKKW-AM, and in 1965 re-established CFCA-FM. In 1980, the corporate name was changed to CAP Productions Limited, and on May 1, 1988 became a division of Electrohome Limited.

A highlight of Bill’s CKCO regime was the expansion of Electrohome Communications service through the acquisition in 1988 of Sunwapta Broadcasting (CFRN-AM-FM-TV) in Edmonton.

Awards include the CAB Broadcaster of the Year (1971), Canada Medal for Community Service (1972), and the CCBA Howard Caine Memorial Award (1977).

In 1990, Bill McGregor was inducted into the CAB Broadcast Hall of Fame.