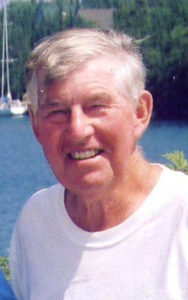 Ted was a graduate of Concordia University (Loyola College) in Montreal. He went on to a long career in education and eventually settled in Waterloo for balance of his career and retirement. While in Waterloo he was heavily involved with the community including being President of the Lions Club, Chairman of St. Michael’s Parish Council, Hydro Commissioner, and member of Knights of Columbus and Retired Business Men’s Association. In his retirement years he spent many wonderful summers in Tobermory and winters in Florida with his inseparable wife Jeanette. A loving father and grandfather he will be missed by all his family and friends.

Visitation will be held at the Erb & Good Family Funeral Home, 171 King St. S., Waterloo on Saturday, February 27, 2016 from 2 to 4 p.m. Parish prayers will follow the visitation at 4 p.m. The Mass of Christian Burial will be held at St. Michael’s Church at 240 Hemlock St., Waterloo on Monday, February 29th, 2016 at 11 a.m., with a reception after in the Parish Hall. A private family interment will follow at Glen Oaks Memorial Gardens Cemetery, Oakville.

Condolences for the family and donations to the Alzheimer Society may be arranged through the funeral home at www.erbgood.com