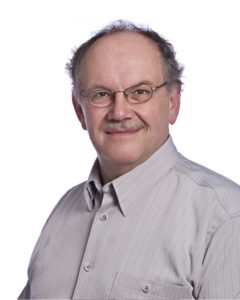 Stephen John “Steve” Bender passed away at Royal Inland Hospital, Kamloops on Friday, November 8th, 2019 at the age of 72 years. There will be no formal service by his own request.
Steve was born in Kitchener, Ontario on August 20th, 1947 to Ruth and Alfred Bender. He studied broadcasting at Conestoga College that began a lifelong love of broadcasting on both radio and television. Steve’s first broadcasting job was in Wingham Ontario. He then worked for CTV and CKKW radio in Kitchener, as well as CFCO CTV in Chatham, Ontario and freelance for CFCA FM radio in Toronto. He was an all-night D.J. and a radio talk show host for 10 years in Kitchener, Ontario. Steve hosted “Bender Beat”; a two-minute documentary of local issues on the televised six o’clock news. Further in his career Steve worked for Revelstoke’s CKCR radio. He loved jogging and skiing and was an active Ski Friend at Chicopee Ski Club, helping new skiers to learn the sport. He wrote a story in 1991 that was featured in Ski Canada Magazine. In 1992 Steve, his wife, Adelheid, and daughter Heidi moved to Revelstoke. He quickly became involved in the community as a member of Rotary from 1992-2019 and serving on Revelstoke City council from 2008-2014. Steve was the first Administrator of the Forestry Museum working with Bob Clarke and Adelheid until 2008 when he retired. After retirement he worked at Home Hardware part time and enjoyed sharing his knowledge of woodworking, plumbing and wiring, Steve helped raise money for many charities including Big Brothers while working in broadcasting in Kitchener-Waterloo.

Steve was predeceased by his parents and parents-in-law. He is survived by his wife Adelheid; daughter Heidi (Chris) Swanson of Revelstoke; his brother Paul (Cate) Bender of Waterloo, Ontario; his niece Elizabeth (Jim) of Waterloo, Ontario and grand dog Cosmo. Steve is also survived by his nephews Sean (Rachel), Adam (Jennifer), Scott (Grace) Meyer, Brandon (Marybeth) Nikel and Colin (Michelle) Nikel, and niece Cheryl (David) Hayman. Messages of sympathy may be sent to Steve’s family by viewing his obituary at: www.brandonbowersfuneralhome.com
Cremation arrangements are in the care of Brandon Bowers Funeral Home, Revelstoke.