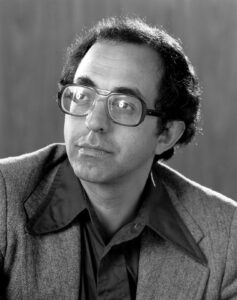 Sam Levene died on Thursday, November 24, 2016, after a long illness. Deeply beloved and at peace, Sam will live in the hearts of the very many family members and friends who were touched by his humor, his care and his unique sensibility and artistry.

Born in Kitchener, Ontario, Sam spent his career in broadcasting, graduating with both a BA and an MA from Northwestern University in Chicago and returning to Canada to take up a job as a television producer at the Canadian Broadcasting Corporation in Toronto. His distinguished work at the CBC ranged widely, including documentaries, dramas and arts programming, with a special focus on theater, dance and music. In 1980, Sam won a Genie Award for Best TV Drama, for his show, “Certain Practices.” After retiring as a television producer, Sam had a second career as a radio producer, where, as in TV, he pursued interests in the arts and in social justice.

Outside of work, Sam was a keen jazz fan and a baseball fan, two avocations he pursued with great zeal and knowledge, sustaining communities of friends around these topics of interest. Mid-life, he discovered the joys of cycling, a sport he engaged both in solitude and alongside others. And he also had a lifelong commitment to camping. Sam met his wife, Aasta, at the former Camp Kawagama in the Muskoka region of Ontario, where he was theater director and she music director. Today this camp is Moorelands, a camp serving Toronto’s children and youth affected by poverty. Sam was a volunteer for Moorelands, donating time and support, including making videos for their website.

Sam is survived by wife Aasta Levene, daughter Nancy Levene and her partner Kathryn Lofton and granddaughter Kinneret Levene Magid, as well as by brother and sister-in-law, Martin and Charlotte Levene, and sister and brother-in-law, Roby and Ted Hochman and the many members of his extended family. Sam’s and Aasta’s daughter, Julie Levene, died in 2012. Sam and Julie are remembered together with our deepest love and gratitude.

Family will welcome visitors to remember and share memories of Sam on Sunday, November 27th at 9 Laureleaf Rd., Thornhill, Ontario, between 1 and 5 p.m.

A talented, gentle man has left us.

Sam Levene spent almost 30 years working in CBC television, in current affairs, documentary, and drama. After he left, he came to radio — to The Sunday Edition — and began making documentaries as a freelancer. He said (and of course we loved that he did) that it was perhaps the most satisfying work he had ever done. He cared deeply about the cultural life and history of this country, especially about theatre and music.

Sam died last week after a long illness, and we are sharing two of his wonderful documentaries in his honour.

Violinist Eugene Kash died in 2004 at the age of 91. In 2002, Sam Levene produced a documentary for The Sunday Edition about his life and work.

Eugene Kash began playing the violin when he was five. At 90, he was still playing, still teaching. He had been a conductor, a soloist. But celebrated? Not enough.

Now, at 90 — his time had finally come. In 2002, colleagues, former students and promising young musicians presented a tribute concert at Toronto’s Royal Conservatory of Music. The guest of honour was also the star performer, Eugene, with his 1753 Guadagnini violin.

Sam Levene’s documentary was called “Play On.” It was first broadcast in December 2002, and rebroadcast in March 2004, after Eugene Kash died at the age of 91.

Sam Levene shared the stories of The Crew-Cuts and The Four Lads — both Canadian, both from the same school in Toronto — in his documentary “Moments to Remember.” (Wikipedia) 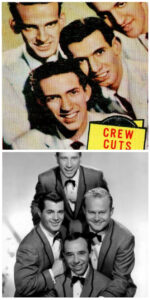 ere was a time in pop music when the biggest stars in the firmament came in sets of four. Long before The Beatles, and alongside Elvis, there were the Four Aces and the Four Freshmen and the Hi Lo’s and the Ames Brothers and literally dozens of other similar sweet-voiced, harmonizing quartets.

Two of the most successful and popular groups from that era were Canadian — and not only were they both Canadian, both were from St. Michael’s Choir School in Toronto.

Out of that early 1950’s milieu came The Four Lads, and a year or so later, The Crew-Cuts — performing a very different kind of music from what they’d been taught at school.

Sam Levene’s documentary, which first aired in November 2004, was called “Moments to Remember.”

Sam gave us a lot of moments to remember. We’ll miss him.