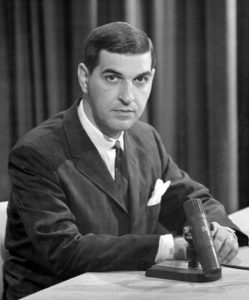 Monday, March 20, 2017 at University Gates in Waterloo at the age of 84. Beloved husband and best friend of Mary Ann (Pittner) for 55 years. Cherished father of Joanne (Al), Paula (Colin) and Sara (Shannan). Proud and loving Grandfather of Daphne and Evan. Loving brother of Jenny in Arizona and also survived by sister-in-law Geny Psutka. Sadly missed by many special nieces, nephews and friends. Reg was predeceased by his parents, Elizabeth and Carl Sellner, brothers Bert, Clarence, Charlie and Vic, and sisters Bernice and Clara.

Reg spent most of his working life in the broadcast industry, starting in radio at CKCR. He joined start up CKCO-TV in the 50’s hosting shows such as Bazaar, Come Into the Kitchen and Canadian Bandstand. He particularly enjoyed hosting Sunday Serenade where he met his future wife Mary Ann (and later proposed to her on their first “official” date.) He went on to wear the red jacket as sportscaster of the evening news. After an adventurous position with the Ministry of Amateur Sport in Ottawa, he returned to CKCO-TV as promotions director, a job he held until retirement. Reg loved family parties, getting together with friends, cooking and his career in broadcasting. His creative side has left us with some legendary recipes and a number of beautiful stained glass pieces. Master of the one-liner, Reg’s ever present sense of humour was a constant source of amusement to most who knew him. Some were left confused. We remain forever grateful to the people of University Gates, especially the staff of the Hagey Neighbourhood, who showed such love, compassion and respect to Reg during his time with them.

Reg’s family will receive relatives and friends from 7-9 p.m. on Friday, March 24, 2017 at the Henry Walser Funeral Home, 507 Frederick St. Kitchener, (519) 749-8467. A Memorial Mass will be held at St. Francis of Assisi RC Church, 49 Blueridge Ave., Kitchener, on Saturday, March 25, 2017 at 11 a.m. Reception to follow in the church hall. Interment to follow at a later date. Cremation has taken place. In lieu of flowers, charitable donations would be appreciated to Schlegel Villages Charitable Foundation – Hagey Neighbourhood or the M.S. Society (cards available at the funeral home). Visit www.henrywalser.com to view Reg’s memorial.