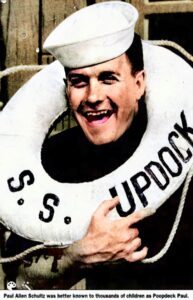 At Paul’s request there will be no visitation of Funeral Service. Reid Funeral Home, 14 Russell St., Leamington, Ontario. 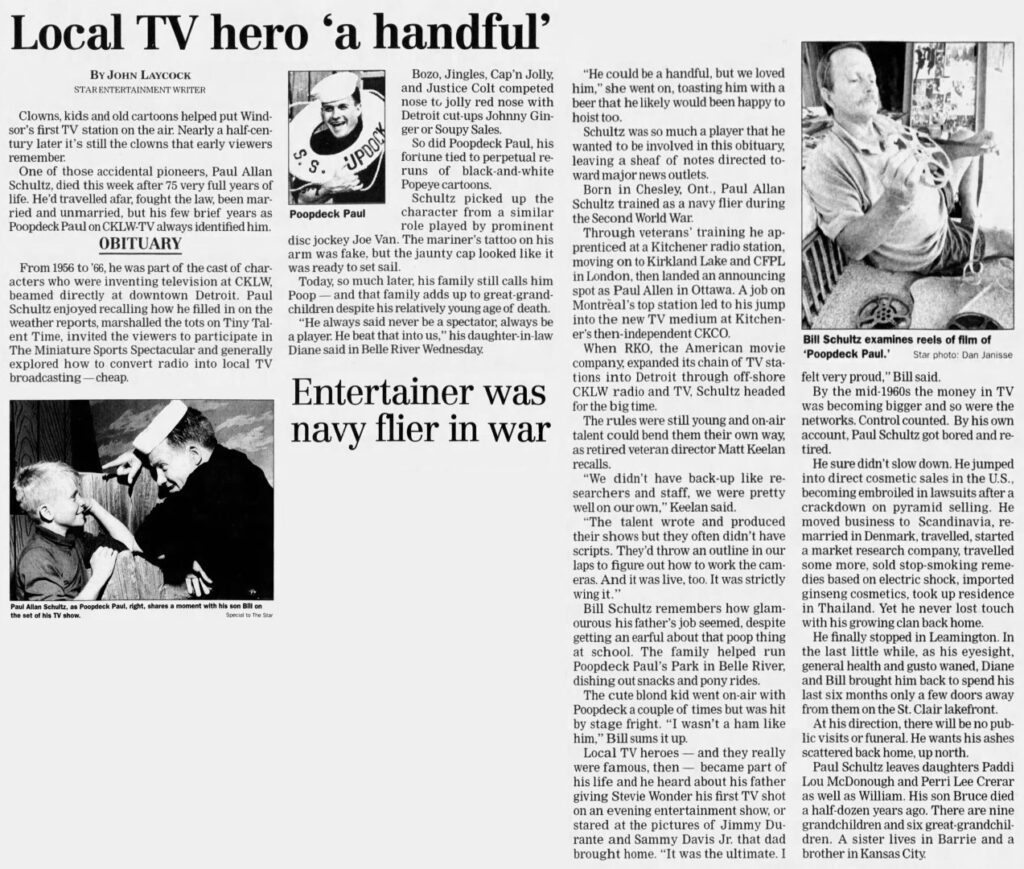 On The Poopdeck with Paul Schultz

According to a 1980 Detroit News interview, Paul Schultz’s son William recalled, “The name Poopdeck Paul came pretty much out of nowhere. They were about 10 minutes from going on the air, when somebody said, “Well, what are you going to call yourself?” And that’s when he came up with the name.”

Poopdeck Paul had his finger firmly in place on the pulse of metro Detroit’s youngsters. When Chubby Checker’s Limbo Rock hit the charts in 1961 Schultz organized Limbo contests. After the Beatles first appearance on the Ed Sullivan Show, Schultz orchestrated Beatle contests, with local mop-topped kids lip-synching to the latest Beatle 45s. The most popular Fab Faux act by far was the Beatle Puppets, four papier-mache likenesses of the Liverpudlian lads who made numerous appearances on the show.

When the weather was warm Schultz took the cameras outside, where kids participated in relay races, go-cart races, miniature golf and gymnastics. The athletic portion of the show became so popular that a spinoff was created, Poopdeck Paul’s Little Sports.

In 1964 two of my sisters appeared on the Poopdeck Paul show to participate in The Baby Game. I accompanied them to the studio, but only got as far as the green room. Paul interviewed six kids with their baby brothers or sisters. While each kid was interviewed, the camera focused on his or her baby sibling. Then Poop spun the “Big Baby Wheel,” which was divided into sections and labeled “noisiest baby,” “quietest baby,” “wettest baby,” “sleepiest baby,” etc.

As luck would have it, the wheel stopped on “noisiest baby.” Unfortunately, my baby sister Ann was quite content under the bright lights, and didn’t utter a sound. The winning family received a turkey dinner with all of the trimmings. My sisters went home with a CKLW sailor hat and a box of Bonomo Turkish Taffy (You smack it! You crack it!)

The show aired live, so I never got to see it. Home video recorders were a good ten years away, but we had the next best thing- Uncle Wally and his Bell and Howell 8mm movie camera. While my family was at the CKLW studios, my uncle was at home with his movie camera aimed at a 19 inch black and white Zenith, tuned to channel 9.

My sisters are now grown and Paul Schultz passed away in 2000, but thanks to my Uncle Wally and his trusty Bell and Howell I can watch my six-year-old sister Pam and my six-month-old sister Ann being interviewed by Detroit TV icon Poopdeck Paul. 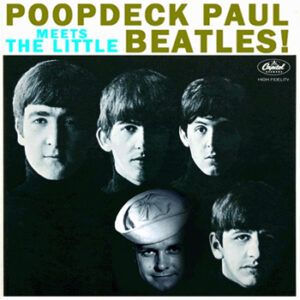 On February 9, 1964 The Beatles made their first live U.S. television appearance on The Ed Sullivan Show. Within days Beatlemania spread like wildfire across the country. Never one to miss a trend, Poopdeck Paul Schultz hosted weekly Beatle contests on his TV show. Boys, girls, parents, puppets and combinations thereof all lip synched live to the latest Beatles hit single. One of the cutest versions of the Beatles on the show were four little ladies named Cindy, Debbie, Ann and Cathy. Some forty plus years later, Cynthia Zwick recalls her fifteen minutes of fame on CKLW-TV with Poopdeck Paul.

In 1964 the Poopdeck Paul show was holding a Beatles Mimicking contest. Most of the contestants were teenagers, but we were 7 and 8 years old. My mom sent in 14 post cards trying to get us on the show. One day I came home from school and she said that the contest was over, but they called from the show and wanted us to be “special guests”. I ran to the front door and saw that Ann’s mom had told her too. Then Debbie came home from school and found out. But we were missing a Ringo, so we ran and got Cathy because her brother had drums. My dad did the lettering for the drums, we got our wigs and outfits, and that weekend off we went to Channel 9 in Windsor, Canada. We choose to sing Misery from Introducing the Beatles. The customs officer had fun with us because we had our wigs on already.

I was John, Debbie was George, Ann was Paul and Cathy was Ringo. We appear in the photos from right to left with Ringo on drums, of course.

When we arrived at the studio they took us right to the back stage area. We were standing next to a 6-foot-tall Bosco character. They asked us some general questions and took the record from us to cue. We watched three teen-age girls sing a song, then they said stay tuned for special guests after a Popeye cartoon. During the cartoon they took us out on the stage and set us up. The sound guy had me talk to test the sound. Then Poopdeck Paul came out and asked if we were nervous. He was very kind, as I remember. They counted down, then Poopdeck Paul began interviewing us. He had too many questions and kept kidding around, wanting us to sing another song, but we did our number then. Afterwards, he gave us a newsletter from the show and autographs and, I think, Zagnut bars. I would have liked Bosco better.

I carry these photos on my I-pod and have fun showing them to people. It was a great experience! 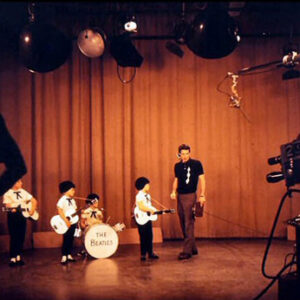 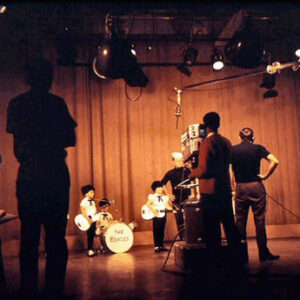 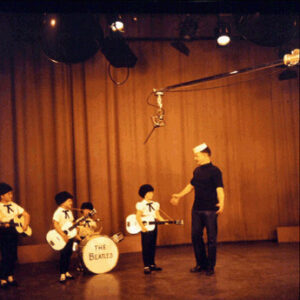