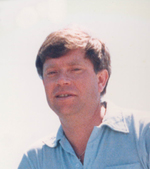 Passed away peacefully on Thursday August 15th, 2013 at Hospice Wellington, at the age of 65 after fighting a courageous battle with cancer.
Lovingly remembered by his siblings Carla Roselle (Tim), Frieda McKenzie (John 1985), David Nyhout (Kris) and Gregory Nyhout (Julie).Paul will be missed by his nieces and nephews as well as friends, neighbours and cousins. Predeceased by his mother Barbara (2001) and father Henk (2012).
Paul was born in England and came to London, ON at the age of 10. He later settled in Kitchener making this his home. He worked for 40 years at CKCO TV and many years with the ski patrol at Chicopee ski hill. One of Paul’s many hobbies was driving convertible sports cars and traveling around North America to ski. He will now be reunited with his faithful companion BJ.
Paul’s family will receive relatives and friends from 2 -4pm on Thursday August 22, 2013 at the Henry Walser Funeral Home, 507 Frederick Street, Kitchener, 519-749-8467. As per Paul’s wishes there will be no formal funeral service. Cremation has taken place.
In lieu of flowers, donations to the Hospice Wellington would be appreciated by the family (cards available at the funeral home).
Visit www.henrywalser.com for Paul’s memorial.