Dalton “Pat” Ludwig passed away peacefully with his wife at his side on Tuesday, October 20, 2009 at Freeport Health Centre of Grand River Hospital, at the age of 82.

Beloved husband of Joan (nee Roedel) Ludwig for 37 years. Pat is survived by his grandchildren Tammy Ludwig (Brad) and Allan Ludwig (Tracy) and two great-grandchildren and one nephew. Predeceased by his son Shane (2006), his parents Alexander and Irene (nee Alles) Ludwig and his sister Dorothy Martin and husband Francis.

Pat played piano professionally since the age of 14 and was a life member of the Central Ontario Musicians’ Association. He attended the Oscar Peterson Advanced School of Contemporary Music, was Music Director for CKCO-TV for 20 years and taught piano throughout his career.

Pat’s family will receive relatives and friends on Friday from 2-4 and 7-9 p.m. and on Saturday from 10-10:45 a.m. at the Henry Walser Funeral Home, 507 Frederick St., Kitchener, 519-749-8467. A liturgy service for Pat will take place in the chapel of the funeral home on Saturday, October 24, 2009 at 11 a.m. Cremation to follow. As expressions of sympathy donations to the Alzheimer Society of K-W or the charity of your choice would be appreciated by the family (cards available at the funeral home). A special thank you to the nurses and staff on PT3 at Freeport for their great care and support.

Pat Ludwig’s career as a jazz pianist began with a simple piece of flat cardboard, painted to resemble a piano keyboard. 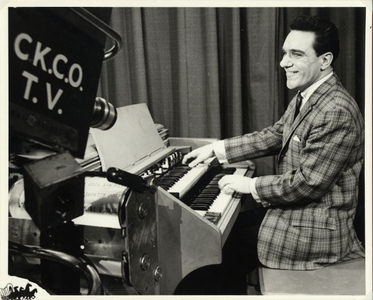 At a time when Catholic schools could not afford the real thing, the flimsy props were used to teach music, albeit soundless. How boring for a naturally gifted boy and so, Pat rebelled and wouldn’t even play his piano at home. Alarmed, his parents contacted a well-known piano teacher, a man who already had a full slate of students though he eventually agreed to at least meet the boy and in that seminal moment as teacher and boy played for each other, something sparked.

“When Pat heard a professional play, he was enthralled,” said his wife, Joan Ludwig.

Soon the student was outplaying the teacher and he was advised to take classical lessons. By age 14 Pat was playing in a professional orchestra.

This was not something his parents had expected. Perhaps everything was moving too fast. “His mother was protective about Pat,” said Joan. “But they (orchestra) assured her, he’d be taken care of.”

As the years unfolded, Pat’s talents became well known and he was never without work, as a musician, piano teacher and, for 20 years, the music director for CKCO playing on shows such as Big Al and Romper Room.

Radio, television and theatre personality, Neil Aitchison remembers his friend and colleague with fondness. “When I think of Pat, I always smile,” said Neil. “He was a soft spoken, shy, quiet fellow but he had an impish laugh and a mischievous sparkle in his eyes.

“He made those locally produced television programs come alive.”

Neil calls his friend a “master jazz pianist” yet a reluctant star who avoided the limelight. “He was just an unassuming, lovely guy.”

Long time friend and jazz singer, Cathy Menard, said Pat had a particular gift for teaching. “People said they learned the joy of music from Pat. He inspired people.”

Pat was also generous, helping Cathy land a job at the television station before he retired in 1981. He also hired her to sing several nights a week with his Fritz-Patrick Trio, a thrill for Cathy.

“These guys, everybody looked up to,” she said. “Getting asked to sing with them was an honour.”

Pat’s other claim to fame — though he never boasted — was a close association with jazz pianist Oscar Peterson after meeting the great man at Peterson’s Advance School of Contemporary Music. In the many social get-togethers between Peterson and his wife and Pat and Joan, there was a comfort level and mutual admiration with neither man caught up in any notion of fame.

Joan had no idea she’d be swinging with the likes of Oscar when she met her sweet piano player.

The couple met in a Stratford restaurant where Pat was playing, just after he had divorced from his first wife. Joan reflects on the odds of that meeting. She had been a quiet, painfully shy young American woman living in Rochester, New York with her parents and when her fiancé was drafted to serve in the navy she happily stayed home awaiting his return. It was a fateful visit of her fiancé’s cousin from Kitchener that changed Joan’s life.

The two young women became friends and Joan was soon regularly visiting Ontario. It was the cousin who took Joan to the Stratford restaurant, introduced her to Pat. Joan’s life was suddenly tipped upside down as she fell madly in love with Pat who was a few years her senior. Joan wrote her fiancé a Dear John letter, quit her clerical job at Kodak and left Rochester bound for Canada. “My parents went into orbit,” she recalled. It would take several months before Joan could immigrate legally, get a job and gain forgiveness from her parents, who soon grew to adore Pat.

The couple married in 1970, honeymooning in Toronto so they could take in one of Oscar’s concerts. “I was shy, conservative, I was afraid of everybody,” she admits. Suddenly, she was the wife of a musician who happened to be buddies with a Canadian legend.

Over the years their married life revolved around music and though Joan played a bit herself, she loved to be serenaded by her funny, loving husband whose hands were never far from a keyboard. It was an idyllic life, until June 17, 2006, when Pat’s son Shane was diagnosed with cancer the same day Pat learned he had a cancerous tumour on his spine. Shane died three months later.

“Pat held it in,” said Joan. “I think it was the beginning of the end. A part of him died when we lost Shane.”

Pat’s health deteriorated over the years, first with cancer then Alzheimer’s and during his last few weeks in hospital, Joan stuck by his side. “I happily did it,” she said. “For him, I’d do anything.”

reproduced with permission from the Waterloo Regional Record 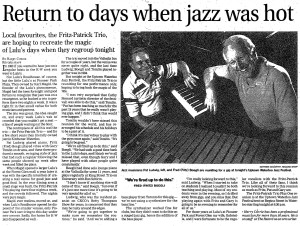