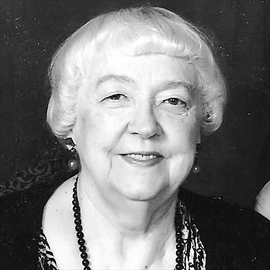 Marlene enjoyed working many years as a general insurance broker in Waterloo Region, serving as Membership Chairperson for 8 years and was an Honorary Member of the Insurance Brokers Association of Ontario; also a board member for 18 years with the Kitchener-Waterloo Skating Club. Having been a competitive skater and Gold Dance Medallist, she became a skating judge serving locally, nationally and internationally until 1994.

She was also a recipient of the 1995 Minor Sports Volunteer Recognition Award as a representative from the Kitchener-Waterloo Skating Club.

Retirement years were enjoyed spending winters in Port Charlotte, Florida and playing duplicate bridge at local clubs plus attending tournaments as a member of the American Contract Bridge League as a Silver Life Master.

A memorial service and reception will be held at St. Stephen Lutheran Church in Kitchener, on Wednesday July 19 at 11 a.m. Donations to the charity of your choice would be appreciated. Messages and condolences may be left at tricitycremations.com.