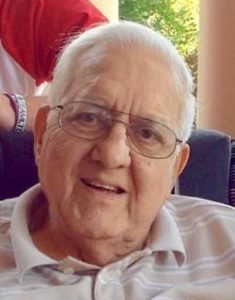 It is with great sadness that we announce the passing of John Vartan Kostigian on May 10, 2017, at the age of 92.

John was a devoted husband to his wife, Joan (Case). He was a generous and loving father to his children Carrie, Holly, and Jason, and a kind father-in-law to Tracy (Johnston) and the late Timothy Wood. He was the proud grandfather of Zachary and Kyle Kostigian, and, Parker and Shelby Wood. He was a good brother to his sisters Nora (pre-deceased) and Alice. John was pre-deceased by his parents George and Mary.

Although born in Owen Sound, John never considered himself anything but a “Galt boy”. As a lad, he shone shoes on its street corners, worked in local factories, and played the trumpet in local bands. As an adult, he built a home, raised his family, and became a business owner in his beloved community. And he was always ready to give back. John was well known for the many hours he volunteered through the Kinsmen Club and the Armenian Community Centre.

John was probably best known, however, both inside and outside of his community, as an entertainer. For over 30 years people flocked to Leisure Lodge to hear “the big band sound of Johnny Kostigian and his Orchestra”. John’s love of music remained steadfast throughout his entire life, rivalled only by his love for his wife and family. He will be greatly missed by all.

At John’s request, cremation has taken place. A Memorial Service will be held in the Chapel of Corbett Funeral Home, 95 Dundas St., Cambridge, on Thursday May 18, 2017 at 2p.m.

A special thank you to the second floor nurses, support workers and staff at St. Andrew’s Terrace for their incredible care and compassion.

Donations to St. Andrew’s Terrace would be appreciated.

John Kostigian had many successes 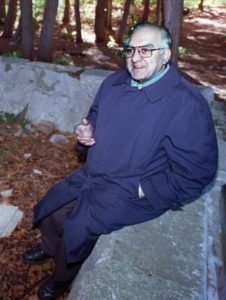 in life as a business owner and community builder, but he always considered his greatest achievement to be the 30 years he spent as Leisure Lodge’s house band leader.

“A lot of people didn’t know he had a business, that he was just a band leader,” said his son Jason Kostigian, who has operated Galt Display Rack since his dad retired a decade ago.

Leisure Lodge was a popular Cambridge nightclub that ran from 1948 until the place suspiciously burned to the ground in 1980. People came from far and wide to dance the night away to the swinging sounds of the Johnny Kostigian Orchestra.

At its peak, the 13-piece band would play Friday and Saturday nights to an audience of 1,100 patrons, many who had travelled from across the province to this hot spot.

“There was nothing like it around, it had class,” Johnny once told The Record. “Leisure Lodge put Preston on the map.”

The self-taught trumpet, saxophone player and band leader loved every moment of performing to an appreciative audience and playing with such talented musicians. Then a beautiful lead vocalist from Hamilton named Joan Case was introduced to the band as a possible lead vocalist.

“Dad was looking for a singer and ended up with a wife,” said Jason of how his parents met, then married in 1954.

Jason said his mom was so good she could have enjoyed a professional career beyond Leisure Lodge, but she chose to stay and raise a family with John. Jason and his sisters Carrie and Holly were never short of their father’s attentions even though he was an exceptionally busy guy. The band even had is own television show from 1957 to 1958, “Sunday Serenade” on CKCO in Kitchener.

John was born one of three to parents who came first to Owen Sound and later Cambridge from Armenia. Though John never wanted to visit his parent’s homeland — too much pain associated with the reason the family had to flee — he always supported the Armenian community. Historians estimate the Ottoman Empire killed 1.5 million Armenians during the First World War and this legacy carried over into Canada and into the lives of people like John.

Life was not easy for the immigrant family and John shone shoes as a boy to help out. He he had to leave high school in Grade 10, working a variety of odd jobs including playing trumpet in local bands.

John was finally able to secure a machinist apprenticeship, a good job for a man whose talents for all things mechanical were superb.

During the Second World War, John enlisted and completed basic training but the war ended before he could be shipped overseas so he returned to Cambridge.

Jason said that despite many successes as a business owner and the creator of an impressive six patents for Galt Display Rack, John always considered himself somehow less than because of his interrupted schooling. Display Rack is a business specializing in making, designing and building products to show things such as carpets and flooring. “He’d say, ‘But I only have Grade 10 education,'” said Jason. “But he was smart and he had that drive.”

Starting his own business, however, came about quite unexpectedly.

A friend of John’s, knowing his mechanical aptitude, asked if he’d build him some racks.

“He made them in his backyard,” said Jason. The racks were so good, orders started pouring in and John decided to make the leap, quit his job and go into business for himself, opening his first factory in 1953.

Aside from the success of the business, John also volunteered with the Kinsmen and sat on the service club’s executive plus, he was active in the Armenian-Canadian community, helping establish the Armenia Community Centre of Cambridge on International Village Drive.

For John, his life was about helping anyone he could.

Jason said, “Dad didn’t have an angle.” As a father, John was “a great guy, a real family man.”

Though music had been close to his heart for so long, once he stopped playing at Leisure Lodge in 1978 John left the world of music.

“For Dad, that chapter of his life was over,” said Jason. “He would say ‘the band was the biggest part of my life.’

“This is what everybody knew my dad for.”

John continued running the rack company well into his 80s going to work every day. Gradually he let his son take over and was happy to enjoy retirement.

“Dad loved business, he loved working,” said Jason. “Up until his last breath, he’d ask me ‘how is the shop?’

“He needed to know how things were, that everyone was happy. He didn’t know how good a businessman he was.”

Jason spoke of his father’s honesty in business, how he believed in ensuring each customer was satisfied and his uncanny knack for sourcing materials, gadgets and doodads, anything anyone needed.

“This was in the days before Google,” said Jason.

The son also spoke of his father as so well known in the community it was impossible to walk 10 feet without an interruption.

“Everyone stopped to talk to him and at one corner store, the owner would sing to him,” said Jason. Apparently the man was jokingly auditioning to perform with John’s band.