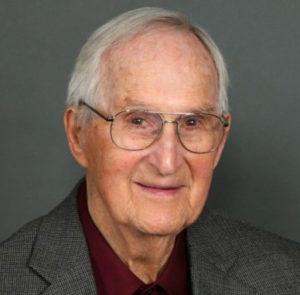 John “Jack” Joseph McCarron passed away peacefully at the Fahey Rehab Bldg., Syracuse, NY on February 5 at the age of 91. Jack is predeceased by his parents John J. and Florence Bedford McCarron; his wife of 49 years, Kathleen Kennedy McCarron; and siblings Patrick, Mary Mohan, Grace, Robert, and Phyllis Kirvan. Jack is lovingly remembered by his children Maureen (Mark Deprez) of Conesus, NY, Daniel (Jana) of Rock Springs, Wyoming, and Shelagh (Theresa Contos) of Syracuse, NY; grand daughters Kathleen (Jared) Ransom of Honeoye, NY and Anne Deprez of Buffalo,NY; great-grandson Erik Ransom; sisters Helen Pollack of Guelph, ON, and Elizabeth Mindorff of Ridgeway, ON; numerous nieces, nephews and close friends. Born in Puslinch, ON, Canada in 1921, Jack graduated from the Canadian Electronics Institute in 1942 and served in the Canadian Merchant Navy as a radio operator during WW II. He subsequently worked for the Canadian government as a radio operator/weather observer in Goose Bay, Labrador and as chief engineer at CKCO-TV in Kitchener, ON; WKBW-TV in Buffalo, NY and Time-Warner Cable, Grand Island, NY. Jack enjoyed music, “keeping up” with his large extended family, participating at church, and the Canadian Merchant Navy Veterans Association of which he was a founding member. A Memorial Service will be held at The Bernardine Senior Apts. 417 Churchill Avenue, Syracuse, NY on February 16 at 3:00 PM with Deacon Stephen Manzene officiating. On March 9, 2013 a Memorial Mass will be held at Church of Our Lady Immaculate, 28 Norfolk Street, Guelph at 10 AM with interment following at Marymount Cemetery. In lieu of flowers, memorial donations may be made to The Loretto Foundation, 1305 Nottingham Rd., Jamesville, NY 13078. Arrangements have been entrusted to the Gilbert MacIntyre and Son Funeral Home, Dublin Chapel, 252 Dublin St. N., Guelph. Cards are available at the funeral home, 519-822-4731 or online condolences for the family may be offered online at www.gilbertmacintyreandson.com.
Memorial Mass will be held at Church of Our Lady Immaculate, 28 Norfolk Street, Saturday, March 9, 2013 at 10 a.m.with interment following at Marymount Cemetery.