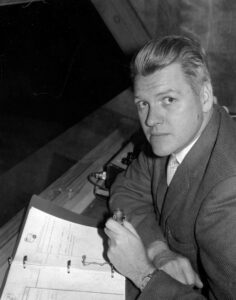 Passed away peacefully, at home, on Monday, February 14, 2000. Hugh Bowman in his 74th year, was the beloved husband of Barbara (Kitchen) Bowman of Guelph. Loving father of Michael, David, Peter and Catherine. Brother of Mary Lou Burleson and Julia White. Predeceased by one sister Jeanne Arnott. Hugh was a long time sports editor of the Guelph Mercury and play by play broadcaster. He was Past President and honourary lifetime member of the Ontario Sportswriters and Sportcasters Association and a member of the University of Guelph Gryphons Hall of Fame. Resting at the Gilbert MacIntyre & Son Funeral Home, 252 Dublin Street North, Guelph, from 2 to 4 and 7 to 9 p.m. Wednesday. Funeral Mass 11 a.m. Thursday, February 17, 2000 at Church of Our Lady. Cremation to follow. Vigil for Hugh will take place 8:30 p.m. Wednesday evening. As expressions of sympathy, donations to the Heart and Stroke Foundation of Ontario or St. Joseph’s Health Care Foundation or Guelph General Hospital Foundation would be appreciated by the family (cards available at the Funeral Home).

After a brief career in teaching, Bowman graduated from the Lorne Greene

Academy of Radio Arts in 1949 to become Sports Director of CJOY until 1954. He also worked at CFRA Radio in Ottawa, CKKW in Kitchener and as the Public Relations Officer for the Ontario Hockey Association. He later became Sports Editor of the Guelph Mercury, a job he held until 1986. If there was a big sporting event in Guelph, Bowman was there.

Hugh’s rapier wit brought colour to more than 1,000 hockey broadcasts including Memorial Cup, Centennial Cup and AlIen Cup games. He was also the voice for the network broadcast of hockey games from the 1960 Winter Olympics in Squaw Valley. He was also the “Voice of the Guelph Gryphons” handling PA duties for many events at the University.

He penned over 5,000 of his popular “Sportslines” columns in the Mercury keeping sports fans in Guelph up-to-date, and often chuckling, on the happenings in their town.

He was elected to the University of Guelph’s Sports Hall of Fame in 1990 and is a Life Member of the Ontario Sportswriter and Sportscasters Association.

Inducted into the Guelph Sports Hall of Fame – Builder category – May 6, 1998