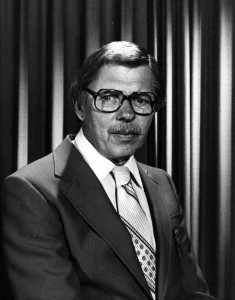 1928 – 2008 George passed away at Grand River Hospital with family at his side, after a brief illness, on January 29, 2008 at the age of 79. George had a long career in radio and television broadcasting starting in radio at the old CFCA in Kitchener, CKEY in Toronto and then back to his hometown of Kitchener to work at CKCO TV, where he retired after 37 years of service. He will be sadly missed by his wife Robbie (Derby) of 56 years; children, Gail and Ken Newland, Deb Moskal and Dave Arnott, Mike Moskal and Nancy McGuire and Pat and Jason Wilton; grandchildren, Christine, Robert, Adon, Sandra, Christopher, Ryeleigh and Foster, and by his extended family. To honour his wishes, George will be cremated and there will be no funeral service. The family invites those who wish to celebrate his life, to a memorial gathering at the Erb & Good Family Funeral Home, 171 King St. S., Waterloo on Saturday, February 2, 2008 from 2-4 p.m. in the Historic Kuntz House. Condolences for the family and donations to the Grand River Regional Cancer Centre may be arranged through the funeral home, 519-745-8445 or www.erbgood.com. In living memory of George, a donation will be made to the Trees for Learning Program by the funeral home. A special thank-you to all the doctors and nurses of the 8th floor who were so kind and caring to George and his family.