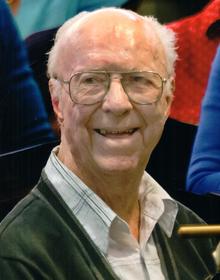 George Edward Kadwell passed away peacefully on Saturday, December 30, 2017 at the South Muskoka Memorial Hospital in Bracebridge with his loving wife Eleonore at his side. George was predeceased by his parents Ella & George, and by his sister Joan and by his brother Robert.
George is survived by his wife Eleonore, his former wife Pat and their children; Susan Knarr (Daryl) and George and by his grandchildren; Sarah Henkel (Mike) and Joshua and his great grandchildren Sadie and Brooklyn. A celebration of life service will be held at St.James Anglican Church, Gravenhurst on Saturday, June 23, 2018 at 1:00 p.m. If so desired, donations in memory of George may be directed to St. James Anglican Church, Gravenhurst or to The War Amps. Arrangements entrusted to the Cavill-Turner Funeral Home, Gravenhurst. Messages of condolence may be left at www.cavillfuneralhome.com