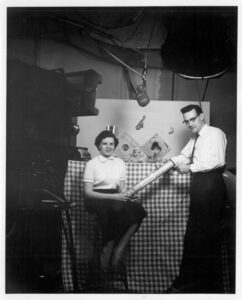 Mr. Hildebrand graduated from Ryerson Technical Institute in Toronto in 1950 and began his radio broadcasting career in North Bay., Woodstock and Wingham. He was then a station owner in partnership with MacLean-Hunter in Chatham, Kitchener and Orillia. He later became a broadcast consultant in Direct Television Communications Internationally. In 1988 he started the Superior Seniors Network at CKTB, St. Catharines. which produced entertainment for seniors. Mr Hildebrand worked with the station until the time of his death.

Family members surviving besides his parents are his wife Meegan Welsh-Hildebrand whom he married September 3, 1983; step-children Hal Martin, Vaughn and Deborah Goodwin; aunts Mary Goodwin of Stratford and Rose Vining of Lakeside; an uncle James Hornsey of California and several cousins.

Friends and relatives may call at the W. G. Young Funeral Home, 430 Huron Street, Stratford on Wednesday, March 19, 1997 from 7-9 p.m. Funeral service will be held at the funeral home on Thursday, March 20, 1997 at 1 p.m. Rev. Cannon Michael Farr will officiate. Interment will be at Avondale Cemetery. As expressions of sympathy, donations me be made to the Diabetes Association or Heart and Stroke Foundation.