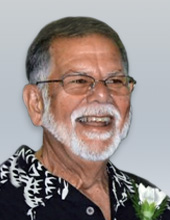 Don passed away peacefully on Tuesday morning in Leamington, Ontario at the age of 86. Loving husband to Laura Fay for 65 years. Dear father of the late Mark (Carolyn), Matt (Corinna), and Don (Michelle). Proud grandpa of Ian (Sarah), Shawna, Bobbi (Cody), and Eric, and great grandfather to Kaysen and Brennan. He will be dearly missed by his many extended family members and friends.

Don’s humble, soft-spoken personality and calm, peaceful demeanor will be fondly remembered by all those who knew him. He was an articulate man of quiet dignity who naturally invoked respect and admiration.

Born in Port Burwell, Ontario Don grew-up near the shores of Lake Erie and spent hours as a young boy exploring its beaches. He loved boating and fishing for Perch, Pike, and Pickerel. As a young man, he was drawn to technology and arts and worked briefly in radio. But it was his love of broadcast television which eventually led to a long and successful career across Canada. Don was a true pioneer in the TV business and helped create some of the best viewing content in Canada. He was behind many of the influential news stories that shaped Canadian society in the ‘70s and ‘80s.

On October 5, 1956, Don married the love of his life – Laura Ruby Fay. With Fay by his side, they settled in Scarborough and Markham Ontario where they began their family, raising their three boys. In the mid 1970’s a career opportunity for Don brought the family out West where they set roots in Maple Ridge, British Columbia.

Eventually the East lured them back and 14 years later Don and Fay moved back to Ontario and eventually settled in Leamington. During this time, they tackled many home renovation projects doing much of the work themselves. Now semi-retired, Don found his dream job – driving the local minibus for seniors and adults with learning challenges.

Don always had a keen passion for travel and adventure. He loved fishing, camping, and with Fay travelled often to destinations including Mexico, Punta Cana, Ireland, and Greece, as well as exploring all that British Columbia had to offer. But his greatest love was family and he cared for nothing more than spending time with them, sitting back and quietly observing their hilarious shenanigans.

Don was usually up for an engaging game of cards, particularly if his favorite tunes were playing in the background. In his later years, he enjoyed watching his grandchildren grow. Eagerly cheering them on in baseball, hockey, or dance.

Sadly, the effects of Alzheimer’s disease overwhelmed his body and Don eventually moved into the care of the Leamington Mennonite Home where he lived out his final days.

As per Don’s wishes, cremation has taken place. Arrangements have been entrusted to SIMPLE CHOICE (Leamington) 519-254-2585. Online condolences and cherished memories may be shared with the family at www.simplehoicecremation.ca