Dennis Blaine Connolly – Peacefully, in his 80th year, surrounded by his family at St. Mary’s Hospital on Thursday, March 18, 2010.

Dennis enjoyed his 29 years at CKCO TV and his active involvement in Knights of Columbus, K-W Musical Productions, St. Vincent de Paul Society and many other community organizations.

A very heartfelt and warm thank you to the fifth floor nursing staff at St. Mary’s Hospital and Dr. Fielder for their compassionate support. As expressions of sympathy, donations to St. Vincent De Paul Society or the Heart and Stroke Foundation would be appreciated by the family. Visit www.henrywalser.com  for Dennis’ memorial. 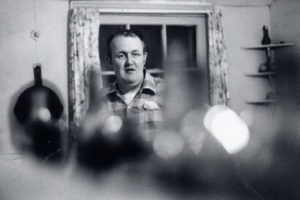 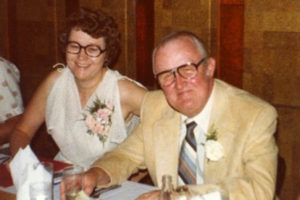 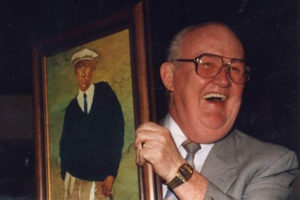 Dennis Connolly was a man whose personality far exceeded his stature, according to Blaine Connolly, one of his five children and a son who deeply admired his father.

“He was the social butterfly and mom was the wallflower,” Blaine said. “We hated going shopping with him, it took forever. He knew everybody and stopped to talk.”

Dennis’ sociable nature coupled with his keen intellect was perfectly suited for a career in the 1960s in the emerging age of television advertising. He made his mark after being hired in 1964 by CKCO TV where he would both sell and create ads, and do so on a shoestring. “He used his kids as props,” Blaine said.

Dennis was so successful, Blaine said he doesn’t recall any ad campaigns failing. It was his father who came up with the idea of naming Listowel “Car City.” With Dennis’ leadership, the retail advertising department at the station grew to become “the largest in Canada,” Blaine said, still beaming with pride at his father’s accomplishments.

When he wasn’t working, Dennis was volunteering with service and business clubs, including the St. Vincent de Paul Society and Kitchener-Waterloo Musical Productions where he both performed and served on the board. With his lovely Irish tenor, Dennis was asked to sing solos and was also in demand for weddings and special events.

“I still remember his rendition of the Old Rugged Cross at Easter,” said Al Barna, who knew Dennis from church as well as Kitchener-Waterloo Musical Productions. Although Al liked the rendition, some of the old stalwarts in the church were less than impressed. That was the thing about Dennis, he could never leave well enough alone if there was room for improvement.

Blaine said this was particularly true in the kitchen, his father’s favourite haunt and where he considered recipes as mere suggestions. Why make mashed potatoes with plain old butter when you could add five other ingredients and really make it zippy.

Dennis was born in Nova Scotia, one of nine children. His father was a produce wholesaler trying to 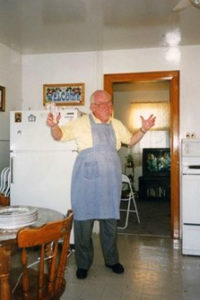 raise a large family in a failing economy. Like many East Coast families at the time, his parents had to farm out some of their brood to relatives. Dennis went to live with an aunt for a time, but eventually returned home and remained close to the extended Connolly clan throughout his life.

After graduating from high school, Dennis took a job in a steel plant, a job that nearly killed him when a concrete ceiling collapsed just hours after he’d been standing there. Dennis found a safer work environment in broadcasting sales where he also discovered a knack for connecting with people.

In 1954, he married Mary Kathleen Gallant and the couple produced five children in quick succession. With a big family to support, Dennis figured he needed more income and convinced Mary to move to Ontario. With five children under the age of six and with his best friend as part of the entourage, they headed to a new life in Hamilton where Dennis landed a sales job in radio. The problem was it was a rock station and Dennis didn’t consider rock and roll to be music. It was time to move on.

CKCO in Kitchener was hiring and must have been impressed by the highly energetic and ambitious Dennis, soon promoting him to retail sales director, where he thrived. Dennis was particularly protective and supportive of his staff to the point that if anyone created a problem for employees, Dennis could be heard bellowing, earning him the nickname “Blue,” the colour of his face.

After 28 years at the station, Dennis retired in 1992. He immediately completed a real estate course and formed Connolly Real Estate with Blaine. Their timing was bad. Canada was still in a recession and, after a couple of years, they closed the business.

Throughout his working career and volunteer gigs, Dennis always exhibited a gift of making people feel special. Blaine said his father believed in learning about people’s interests in depth so you would always have fodder for conversation. Of course, it was also an excuse to gain ammunition whenever he was trying to prove a point, particularly when the subject of politics erupted. Dennis could never offer an uninformed opinion, everything had to be backed up with historical facts and figures.

“He’d say, ‘Well, I have to tell you what happened in Russia in 1912,’ ” Blaine said by way of example, recalling his own reaction to such a statement. Simply, “No, you don’t Dad.”

Blaine thinks of his father as a born teacher, a man who desired to learn and impart knowledge to others. He was a man dedicated to his family, who loved to sing but couldn’t play an instrument, who had an incredible sense of humour that few could resist. At the family home or the family cottage in Muskoka, everyone was welcome. He would even give the cottage to friends for their own family holidays so they could reconnect as he did with his own family every year.

“It was his gift to them,” Blaine said.