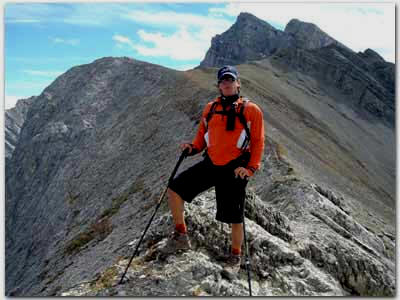 The end: Denis
He was an athlete and a cameraman with a passion for the perfect shot, if only in his mind’s eye

Denis Pierre Faucon was born in Blind River, Ont., near Sudbury, on July 24, 1961, to Claire and Raymond Faucon, a legal secretary and an accountant. Denis was the eldest child, four years older than his brother, Al, and five years older than his sister, Nathalie, who was also born on July 24. From the time they were little, Al remembers Denis as gregarious and energetic. “His alter ego was Dennis the Menace,” Al says. “He was mischievous, but he always had a smile to get himself out of trouble.” Denis was also a natural-born athlete. “He liked to experiment, push the envelope, in every aspect of his life,” Al says. When he played hockey as a boy, he was a competitive forward. He learned to love the Ottawa Rough Riders when the family moved briefly to Ottawa, and took that love back to the Sudbury area to become a quarterback on the Hanmer High School football team.

Those years were a popular time for Denis. He was good-looking, and liked to wear his hair fashionably long. “He took good care of himself,” Al says. “He was well-dressed, well-groomed, and he tried to have as many girlfriends as he could.” Denis also loved music and collected about 12 milk cartons full of albums. In Grade 11, he became fascinated with electronics and audio-visual equipment.

Denis graduated from Grade 12 and went to Canadore College in North Bay for two years to study radio and television production. Before he was out of school, he landed a job as a cameraman at a local TV station. His energy and his ability to get good action footage took him to jobs with CTV, Global and CBC, both on staff and as a freelancer, travelling to the U.S.S.R. in 1987, and various Pan Am and Olympic games. Rob Faulds, a Toronto-based Rogers Sportsnet broadcaster, met Denis at CFCF-TV in Montreal 20 years ago, where he was already one of the most requested cameramen in a pool of eight or 10. “He liked sports,” Rob says, “and it became obvious right from the start that he was a very good shooter. He would get you a different angle, he would get you enough footage that the story had everything. He was like that with news too.”

Denis always aimed high, Al says, for something more dynamic, and he was both tireless and fearless. Rob remembers the time Denis caught a puck in the head during a warm-up at the Olympics in Salt Lake City, but wouldn’t relinquish his camera. “Cameramen are different,” Rob says. “Denis wanted the shot everybody remembers.”

In his time off, Denis drove fast cars — he once owned a Mazda RX-7 — partied with a crowd of friends, and went back to his athletic roots. He learned to play golf, passionately, Al says. He played three-on-three hockey. He skied, he hiked, he mountain-biked. Says his friend and former colleague, cameraman Graham Dunnell of Ottawa, “He loved nature. He always liked to be out in nature.” Another friend, Global TV cameraman Mike O’Drowsky, said that Denis, as much as he thrived on the excitement of a sports event, also loved to sit alone and contemplate the sky. “He would go and pick a real good spot and suck all the energy out of the spot,” he said.

Two-and-a-half years ago, Denis discovered Canmore, Alta., on a road trip out to the West Coast in his Jeep TJ, and decided to move there. When Rob heard about the plan, he says, “I went, ‘Wait a minute, you just took all this time to get established in Ontario and get on all the right call sheets.’ Denis said, ‘If I don’t do it now, I’ll regret it forever.’ ” It was a risk, but “if there was a scale of risk-taking,” Al says, “he would be in the top half.” But, Al says, Denis was not foolhardy.

In Canmore, Denis lived in a beautiful home with a view. “He would send us emails and say, ‘I was out for a hike this morning, or I got up and sat on my back deck and watched the sun come over the mountains while I was having my coffee, and then I went to Sunshine and skied for the morning, and I came back and went for a mountain bike ride, and I went to Calgary to shoot a game,’ ” Rob says. “He would do more by 9 a.m. than most people did all day.” Denis’s friend Theresa van Hoof was there last summer for a visit and he was already praying for snow. “I was like, are you crazy? It’s August.” Theresa and her husband were supposed to visit again in late March, but they had to cancel. Denis decided to go to Whistler, B.C., instead.

He packed his skis in his Jeep. He took a still camera with him. He told Al he was also going to hike the Wild Pacific Trail on the west side of Vancouver Island. On the morning of April 2, Claire Curran of Parksville was out walking on the trail with her mother. She saw a man sitting way out on the black volcanic rock near the ocean as the surf was crashing in. No one knows if that man was Denis, but Rob, for one, can understand him being there. “It could have been the cameraman in him,” Rob says. “He could have been trying to get that perfect shot in his mind.”

At 11:45 a.m., the Ucluelet RCMP and the Canadian Coast Guard found Denis’s body floating in the ocean near Amphritrite Point. He was 45.