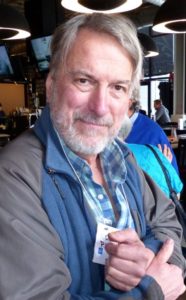 February 22, 1954 – August 22, 2019 – David passed away surrounded by his family at his home after being diagnosed with pancreatic cancer in June 2019. Loving father of Adam (Jordan) Newington, Morgan (Karen) Newington and Samara Balfour. Proud grandfather of Carter Newington and Ophelia Newington. Sadly missed by his sister Janet (Grant) Ertel, sister-in-law Mary Picoski and several nieces and nephews. Predeceased by his parents Edward and Helen Picoski (Beechey) and brother Douglas Picoski. Fondly remembered by Carol Newington, Dana Balfour and countless colleagues and friends. David’s career was launched after taking the Radio and Television Arts program at Conestoga College, while working part-time as an operations technician at CKCO-TV. In 1975, his summer employment with the CBC gave him the opportunity to cover the Montreal Olympic Games. This was followed by employment with Television One in New Zealand. In November 1981, David became part of the first crews hired for the CBC’s “The Journal” where he worked with Canada’s elite television reporters and producers who all respected his talent, razor sharp intelligence, professionalism, great team spirit, irreverent droll humour and quick wittiness. They created documentaries around the world, which were honoured internationally. David was thrice nominated for the prestigious Gemini award for best documentary sound. David’s interests included archaeology (he spent 1980 in Belize working on a dig) photography, music, travel and gourmet cooking. His travels took him to New Zealand, Indonesia, Singapore, Malaysia, Thailand, Hong Kong, Macau, Burma, India, Nepal, England, Mexico, Guatemala, Belize, the United States and throughout Canada. He made lasting friendships wherever he went. David loved music and was on the board of directors of the Cambridge Symphony Orchestra. He also volunteered at the Trinity Community Table in Cambridge where he lived. David was humble- a very gentle, kind, generous, thoughtful man with a huge heart. He was an animal lover and adored his beloved rescue cat Ed. David’s family wishes to thank all his colleagues, friends and caregivers who visited him and who stayed by his side throughout the last days of his life. In the face of his impending death, David was incredibly brave. Never the victim, in typical David fashion he just said, “my lease has expired.” As an expression of sympathy, donations to your local food bank, soup kitchen or church food program would be greatly appreciated. Cremation has taken place. A celebration of David’s life will be held in the near future. “I was born under a wandering star” could be David’s epitaph.