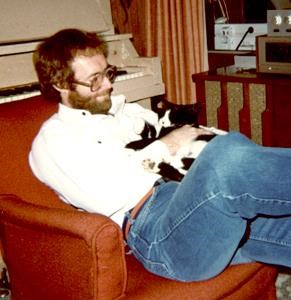 Robert Edwin Walton – The son of Mildred and Albert Walton, Bob was born and raised in Markham and later Brechin on his family’s farms. He attended high school in Orillia, then headed to Toronto where he completed a degree in electrical engineering at Ryerson University. He was a technical wizard and had a lifetime love of electronics. In his leisure time he loved music, classic cars (especially corvettes), travel, cats and being on the water.

Bob began his broadcasting career in the technical department of CRVR in Barrie, then at CKCO TV in Kitchener. In the early seventies he moved to Toronto and joined the Canadian Broadcasting Corporation as an electronics specialist in the maintenance group. Working on hockey night in Canada, was one of his assignments. He advanced rapidly and became a Technical Producer in 1980. His first major assignment was the planning and launch of an ambitious and technically complex new CBC Television current affairs program, The Journal. The program launched successfully in 1982, and under Bob’s leadership pioneered new technologies and new production techniques. Bob enjoyed and excelled at the challenges, and crews universally respected and enjoyed working with him. In 1984, once the operation of The Journal had been stabilized, Bob was recruited to guide television facilities technical planning for the CBC’s new Toronto Broadcast Centre. He continued to represent the technical interests of CBC Television production as facilities planning manager throughout the project’s construction and move-in phases. After this was complete, he assumed a series of technical planning and management roles at the CBC until his retirement in 2008.

After retirement, Bob moved to Victoria and pursued his love of travel and classic cars. He continued to apply his electronic skills by producing amazing anthologies of music for friends. He leaves behind his brother Ron (Margaret), nephews James (Kristyn) (Joel).

A celebration of his life will be held in the summer by the water as current health restrictions permit. Condolences can be shared at waltonr.01@outlook.com.