The family of William Thomas (Bill) Valentine sadly announces the loss of a dear husband, father and grandfather. Bill age 73 years, who passed away suddenly, but peacefully, at home in Elmira, on Saturday, April 22, 1989.

He will be sorrowfully missed by his wife, Iris; 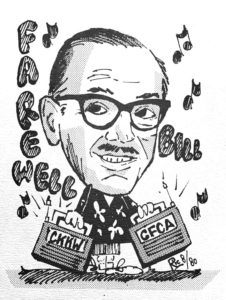 his daughter, Ginny; his grandchildren, Laurie, Kaley and Matthew; his sister, Mildred and his brother-in-law, Ted Dallman of Winnipeg, Manitoba.

Bill was a past national president of the Association of Kinsmen Clubs, as well as a member of the Half Century Club of the Canadian Association of Broadcasters.

Friends may call at the Dreisinger Funeral Home, Elmira, where the family will receive their friends today (Tuesday). 2-4 and 7-9 p.m. Funeral service will be held in the chapel on Wednesday at 2 p.m., with Rev. Robert Hulse officiating. Interment Elora cemetery.

In his memory, donations to the Heart and Stroke Foundation of Ontario would be appreciated.