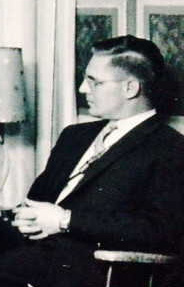 In these parts, television pioneer William Albert (Bill) Stewart will undoubtedly be remembered best as producer and director of Time For Juniors, a popular, award-winning television show that aired on CHSJ- TV for 14 years in the 1950s and 1960s. Hosted by his first wife, Jene Wood, the show became a vehicle for countless youngsters to exhibit their musical and artistic skills to a wide audience, as well as providing a talent base for the annual Empty Stocking Fund broadcasts. For Stewart, who died on October 18 at age 80 in the Los Angeles suburb of Thousand Oaks, his years at CHSJ were also the springboard to a successful TV broadcast career in Ontario where, in 1991, he stepped down after 16 years as vice-president, programming, with Global Television.

Even after retiring to California with his second wife, Elaine, a financial consultant he met through mutual friends while on a TV junket to Los Angeles, the avid golfer and music lover worked as a part-time consultant for Global. Stewart also travelled widely before he developed the first symptoms of dementia in 2001. He also suffered from Parkinson’s disease.

Elaine Stewart, who will bring her husband’s ashes to the Port City for a private family memorial service on Remembrance Day, said she was drawn to Bill Stewart by his warmth and sincerity. “He was the most honest, ethical person I’ve ever known,” she says. “Bill was so full of life. He was never afraid to try anything.” Grace Craft, a local radio and TV personality who worked with Stewart at CFBC Radio and later at CHSJ, remembers him as a perfectionist. “It was all business,” she says. “He really had a special knack for the business, and obviously learned it well.”

Born in Saint John on February 18, 1926, Stewart was a son of the late Mabel (Ramsay) and William Stewart. He graduated from Saint John High School and Acadia University, Wolfville, N.S. Marion Damery said her younger brother was always good to her. “Bill was a kind-hearted person, very family, with a good sense of humour,” she says. “He came home every year to see me and called me every Sunday. Twice, he sent me tickets to come out to California.” Elaine Stewart says her husband often spoke about the Bay of Fundy. “It meant something to him,” she says. “I think the upbringing he had, both in Saint John and Acadia, were what moulded the way he dealt with life. Certain principles and ethics, that’s where they came from.”