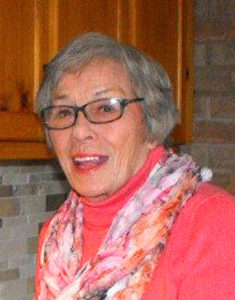 The family is saddened to announce that Barbara Ann (nee Wright) passed away on October 11, 2019 at Wellington Hospice after a brief illness with pneumonia. Predeceased by her devoted husband of 59 years, Don Farr, and companion dog, Gus. Survived by her loving daughter Virginia Kirkpatrick, son-in-law Jay, and grandson Dane. Predeceased by her parents, Carl Wright and Greta Chesney, and her brother, William Wright. Barbara was born on September 26, 1931 in Hamilton, ON, and lived in various small towns growing up, including Markdale, ON. As a young adult she enjoyed working up north at the Delawana Resort, and later worked switchboard at CKCO TV in Kitchener, where she met Don. They went on to run a successful Guelph business together, Don Farr Television Ltd., for 30 years. One of Barbara’s greatest joys was renovating and decorating the Farr family farmhouse where she and Don made their home for over 40 years. Barbara’s love of animals gave her much pleasure over the years as she cared for a variety of dogs and cats, as well as a special crow and pig, and was honoured for her tireless fundraising as a 25 year volunteer member of the Guelph Humane Society. Barbara is remembered fondly by members of the Guelph and Mountain Grove Christadelphian Ecclesias where she attended for many years. A private graveside family service has taken place at Barbara’s request. Arrangements entrusted to the Wall-Custance Funeral Home & Chapel.