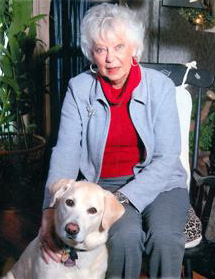 Barbara Anne (nee Hawkins), a resident of Chatham, passed away on December 6, 2010 at the Chatham-Kent Health Alliance-Chatham Campus, at the age of 78. She was born in Woodstock, Ontario and was the daughter of the late Dr. Russell & Norma (nee Warwood) Hawkins. Wife of the late William Green (1994). Barb has had an interesting career that has made use of her many creative talents, since she was in high school in Woodstock. During high school, she designed wedding fashions and drew seasonal fashion changes for a store in Woodstock and also got her start as a model. By the early 1950s, Barb was one of the pioneers in the fledgling television industry, starting as a film editing assistant at CKCO-TV in Kitchener and later becoming that stations Chief film editor, in addition to working as a model. She also took a turn in front of the cameras. The show was Melody House, and it appealed primarily to preschoolers and young school age children. When Barbs daughter, Mardi was born, Barb continued her work with the infant television industry in the mid 1950s, but in Wingham, Ontario, where she trained new film editors and set up the film department for CKNX-TV. She also continued TV modeling and produced, directed and hosted a childrens show Showtime. About the time her son Marc was born, it was off to Chatham, where she worked on Chatham and Kent Countys first Shopper, the Southwestern Ontario Shopping News. From there she took the job at Eaton Yale as personnel secretary. Following that experience, she signed on with Steve Best, who was in the process of launching the Chatham-Kent Shopping News. When Best closed the Shopping News, she accepted an offer from Daryl Kinley of the Wallaceburg News. She retired in 1991 to care for her husband Bill. Barb and Bill were the artists, designers and builders of the 600ft Corn Mural at the 1979 Ploughing Match, now partially housed at the Chatham Cultural Centre. Barb taught crafts at Campbell A.M.E. Church where she was a member. She was a volunteer for Big Sisters for over 11 years as well for Imagination Inc. At Barbs request there will be no public funeral. Private family arrangements are to take place. Memorial donations to honour Barbs life can be made to the Humane Society, Community Living or Easter Seals and would be appreciated by the family. Online condolences may be left at www.mckinlayfuneralhome.com McKinlay Funeral Home 459 St. Clair Street Chatham, Ontario (519)351-2040