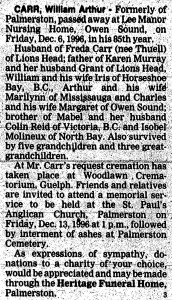 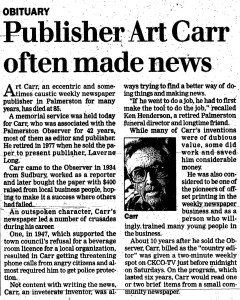 Adsett: Carr was ‘a fierce news man, insistent on councils being transparent with the public’

TORONTO – Longtime Palmerston Observer publisher Art Carr will be among the first inductees to the Ontario Community Newspapers Association (OCNA) Hall of Fame. The association announced in late April that nine individuals will make up the inaugural Hall of Fame class. They will be formally inducted in a ceremony this fall. “The [OCNA] launched the Hall of Fame Awards earlier this year, and received a number of nominations outlining the achievements and initiatives of a wide variety of newspaper pioneers,” OCNA officials stated in an April 29 press release. “We are excited to unveil the nine extraordinary individuals who have been inducted into the Hall of Fame, to be celebrated and remembered for their tremendous contributions to community journalism.”The OCNA is announcing one inductee per week (alphabetically) for nine weeks.

Last week it was Joanne Burghardt, director of content for Torstar Corporation Community Brands, and this week’s inductee is Carr, who is being recognized posthumously as “a newspaper publisher, editor and innovator.” He was nominated by the Wellington Advertiser.

Arthur William (Art) Carr was born in Sudbury in 1912. In the 1920s, Carr was working at a newspaper in North Bay when the stock market crashed and the Great Depression hit. After being laid off, he sold his Model T for the price of a new overcoat and a ticket back to Sudbury, where he joined the staff of the Nickel City Press.

He later joined the Sudbury Star, but they “wouldn’t let me play around and learn to be a linotype operator and I thought they were standing in my path of progress and I quit,” Carr stated in a 1982 interview with The Sudbury Public Library. So he moved on to the Sudbury Journal.

Carr arrived in Palmerston around 1934 and joined The Palmerston Observer as a reporter. He eventually bought the Observer, using funds raised from local businessmen.

Considered be one of the pioneers of offset printing in the weekly newspaper business, Carr laid claim to making The Palmerston Observer the first Ontario newspaper printed by offset lithography in 1958. Carr was well known for his mentorship of young people in the business, including Bill Adsett, who founded the Wellington Advertiser in 1968. “Dad did business with him decades ago when he was first starting out,” said current Advertiser publisher Dave Adsett. He noted Carr was renowned for being an innovator, but the Palmerston publisher also did a lot to advance the journalism profession in general. “He was also a fierce news man, insistent on councils being transparent with the public,” said Adsett. “That challenge continues to this day.”

Carr retired in 1977 and sold the Observer to Laverne Long, who remained at the helm until the sale of the paper to Metroland in 2000. About 10 years after selling the Observer, Carr took on a weekly spot on Kitchener-based CKCO-TV. Hitting the air just before midnight and billed as the “Country Editor, ” Carr would highlight a couple of items from a community newspaper in the area. The program lasted six years and was a popular feature for the station.

In a 2016 blog entry, local historian Chad Martin credited Carr with “making huge inroads into the formal preservation of Palmerston’s history. “He was a major advocate of promoting local news and stories. Seeing an opportunity to do just this, Carr quickly began researching and printing various articles about ‘the good old days’ and the local heroes of the town,” Martin wrote.

“It’s perhaps this interest in history that prompted George Donaldson, a longtime citizen, politician and businessman of Palmerston, to write a five-page article about the town in 1942.” For the next 30 years, “this was seen as the primary history of the town,” Martin concluded. “This is why the Ontario Community Newspapers Association is thrilled to announce Arthur (Art) Carr as an inductee of the OCNA Hall of Fame,” stated the April 29 OCNA press release. “The Hall of Fame Award recognizes and celebrates individuals who have made exemplary contributions to Ontario’s community newspapers. “Inductees are respected community news professionals who have remained passionate about the industry throughout challenges, opportunities and changes. They are leaders who have helped community newspapers adapt and grow.”