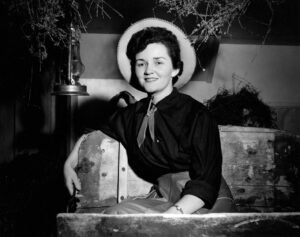 Ada Stella (Franklin) Baker was born in Riceville, New Brunswick on June 22, 1922 and was raised in Woodstock. She married country singer Kidd Baker on January 17, 1939. Ada and her husband travelled coast to coast and 38 states in the USA.On February 15, 1950 they had a daughter named Bonnie Ada Baker. Ada was a vocalist with her husband on such records as “Can’t You See” and “Using My Bible For A Road Map”. On April 26, 1961 Ada passed away in the Carleton Memorial Hospital at age 38 due to complications while under anesthesia.